“I’m so devoted to this issue, and it takes up the majority of my life,” said Lucinda K. Porter, RN, of her hepatitis C advocacy when Hep first profiled her in 2014. “I can’t imagine I’ll ever do anything other than this work.”

At that time, the former nurse had not only cured her own hep C but had become an expert and author in the field and a source of information and guidance for many of her hepatitis peers. She was also a key member of the now-defunct Hepatitis C Support Project. 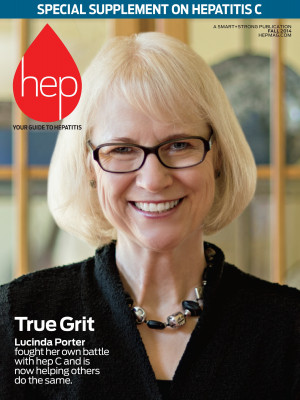 Porter, a former contributing editor for Hep magazine and HepMag.com, is happy to report six years later that there are no new liver-related developments in her life—even though her health has been less than ideal.

“Dealing with hep C taught me so many lessons that I find myself applying to other health issues,” she said. She has been struggling with some cardiac rhythm problems and with Meniere’s disease, an inner-ear disorder that can cause severe vertigo and is managed with a low-sodium diet. “All those years of being a hep C patient advocate for myself and others taught me to not freak out but to just get the facts and be patient,” she said.

She has also become a vegan, spurred in part because “managing my hep C all those years before treatment forced me to eat healthy.” Still, she says, “I’m not rigid. If we go out and I’m hungry, I’ll eat some cheese.”

In 2019, she retired as Hep’s contributing editor. With her new free time, said Porter, “I’m writing but not as much as I would like. I’m in that awkward early phase of retirement where I haven’t figured out what I want to do when I grow up. But that’ll pass.”

One thing she has been learning about is hospice care, having volunteered regularly at her local hospice. “I’ve always been interested in issues of death and dying,” she said. She even looked into becoming a “death doula,” someone who helps people pass, but she hasn’t pursued it yet.

Hep C is far behind her, but she’ll never forget how learning to deal with it changed her. “It was the foundation for how I conduct myself in all my health affairs, taking action while learning to live with something at the same time,” she said. “That’s really the secret of everything, isn’t it? Taking care of your body, staying healthy, helping others and using your own experience to build on and share.”