When Hep first profiled Patricia Shelton back in 2017, life wasn’t perfect—the former heroin user, a peer educator at Settlement Health, still hadn’t treated her hep C, her Harlem apartment was noisy and she struggled with depression. But she still showed a great, sassy lust for life, taking her cue from the tough dames of old Hollywood movies, like Bette Davis and Joan Crawford, whom she adores.

“You only have one life, and each day is a blessing, so don’t wait,” she said. “I overdosed five times, so I know God brought me back for something.” 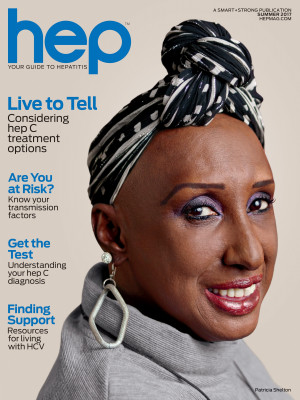 Three years later, Shelton is hanging in there. And guess what? Her hep C self-resolved (15% to 40% of cases do), so she never needed to do hep C treatment, even in this new age of high-efficacy, low-side-effects meds. “The only thing that bothers me these days is my anxiety and lack of sleep,” she said. “I’m going through post-menopause and I’m tired all the time."

Nonetheless, she’s still working at Settlement Health. She also retains her love of travel. Before the COVID-19 pandemic, she had planned to go on three trips this year—to Washington, DC, with her best friend, to Barbados with her daughter, then to North Carolina, for a family reunion.

Shelton also lives with HIV, so she remains involved in HIV activism as part of the New York chapter of Positive Women’s Network–USA and the client advisory board of the New York State AIDS Institute.

She’s not dating, to her chagrin, but she’s proud of her kids, including her middle daughter, who’s going for her PhD. And, to satisfy her love of glamour and aristocracy (she’s a big Kennedys fan), she’s been watching The Crown, the juicy TV saga of Britain’s royal family.

She also appeared in a New York City subway poster campaign in which she and other folks living with HIV explained the benefits of having an undetectable viral load. In addition to keeping you healthy, being undetectable means you cannot transmit the virus sexually.

“That was one of my biggest thrills,” she said. “A little girl on the subway was looking at both me and my image on the poster at the same time and made the connection. ‘Can I give you a hug?’ she asked. That warmed my heart!”

To read the 2017 Hep profile of Patricia Shelton, click here.