Peter McLoyd’s life was definitely on an upswing when Hep first profiled him in 2017 — he was living healthy with HIV, he’d long-ago stopped using heroin, had been working for many years as the advocacy coordinator at Chicago’s CORE Center, which treats HIV and hepatitis C, had married nurse Kathy Jacobs and had finally, on the third try, cured his hep C with treatment.

He had this advice for other folks out there with hep C: “Get into care. Most doctors will recommend you get treated ASAP, and you should, because today’s meds are easily tolerated. We’ve come a long way.” And he added this: “Surround yourself with supportive people and continue to educate yourself. Don’t allow yourself to be stigmatized.”

Since then, his biggest life event is that he had a stroke in 2018 and was in the hospital for about a week, then inpatient physical therapy for a few weeks. “I’m still walking with a limp, so I’m using a crutch to get around,” he said. He’s cut back his job at CORE from full-time to 12 hours a week. He was also planning on going to AIDSWatch, the national HIV lobbying summit, in Washington, DC, but it was canceled due to the COVID-19 crisis. 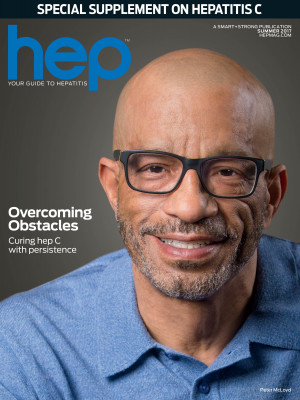 Moreover, he’d just been invited by longtime Black HIV advocates Ernest Hopkins and Cornelius Baker to be part of a working group on HIV and other health issues in the Black community. “We don’t really have a name yet,” he said of the new group.

On the joyous side, he and Jacobs, a nursing supervisor at Chicago’s LGBTQ-serving Howard Brown health clinic, went to events in both DC and Puerto Rico in 2019 to celebrate the wedding of her son. “I could’ve just sat down after this stroke, but I’m not ready to turn everything off,” he said.

He’s still involved with hep C advocacy, too, on the steering committee of the National Viral Hepatitis C roundtable.

Day to day, he works to shed the weight he’s put on since his stroke. “Even at 67, I’m still a bit vain,” he joked. He’s increasing his ability to walk longer distances. “Right now,” he said, “I can only walk a bit before having to stop to rest. I was jogging before my stroke! It’s all a work in progress, I guess.” Other than that, he and Jacobs watch a lot of Netflix. “Since the stroke, I can’t keep my focus to complete a book,” he said. “Before the stroke, I’d read a couple books a month.”

Meantime, he and Jacobs are looking to retire in about a year and a half. “We’re considering moving to the Carolinas or Florida,” he said. He added joyously, “We’re great-grandparents now! Between the two of us, we have four children, three grandchildren”—one of whom lives with him and Jacobs most of the time while attending college—“and one great-grandchild.”

“So despite everything, we’re both still very optimistic about the future,” he said. “With HIV and hep C, when you have a passion for that advocacy work, it’s hard to step away, so we’ll have to keep finding a way to stay engaged and make sure that people everywhere have access to treatment and care.”

To read the 2017 Hep profile of Peter McLoyd, click here.