“We’ve got to try. I don’t think we’ve come this far to let something knock us down, especially when there are things we can do about it. Get rid of the shame and guilt. Go take care of it. It will be gone.”

Those were Gloria Searson’s parting words for people living with hepatitis C and contemplating treatment when Hep profiled her in 2017, only three years after she finally cleared her own hep C after living with it — and HIV — for decades.

By that point, she’d also founded the Coalition on Positive Health Empowerment (COPE), the peer-led nonprofit focusing on liver disease based in the Harlem neighborhood of New York City. She and her team were out there on a daily basis, trying to convince active and former drug users in the community to open themselves up to the idea of hep C treatment.

“If it means I have to share my story to empower them, I will,” said Searson, a former drug user herself. “I always say that I have to walk the walk, because our community is tough on us. Could you imagine if I didn’t look well and I was talking about all of this? It would be hard for them to buy into what I’m saying.”

Three years later, we’re happy to report that Searson, despite a recent fall that has her walking with a cane as she recovers, is still doing her important work for COPE. “We’re trying to make sure we connect with the remaining folks who haven’t been cured yet, the ones we call the ‘challenging’ population,” she said. “In the past year, we’ve gotten 150 people cured [of hep C], and I’m also doing some of this work the past few years in New Orleans, which is working on getting 5,000 folks a year on treatment over the next two years.” 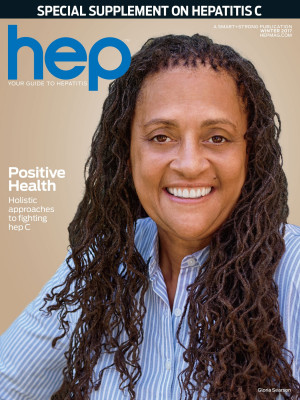 In New York, COPE partners with a syringe exchange as well as methadone clinics to find hep C treatment candidates. “Ninety percent of the folks out there, you have to keep hounding them and be available to talk to them when they’re finally ready to start treatment. They’re scared and they’ll make excuses, like, ‘Oh, I’ll come tomorrow.’ I’ll say to them, ‘Come with me now to get your hepatitis C viral load test done.’ We even bring the phlebotomist with us to draw the blood right there, then take them directly to have their sonogram done [to assess liver damage]. I’ll have their methadone in my pocket for them to drink as soon as they finish, because if they drink it first, it’ll mess up the sonogram.”

COPE manages to do all this despite the fact that funding is “horrible,” said Searson. “New York state has not given us a dime — I’d love to know why, but they’ve never given me a good answer.”

Aside from her work on the streets, Searson and her wife enjoy living together in West Haven, Connecticut, not far from New York City. She’s proud of her kids and grandkids. “I have a daughter who’s a junior in college who has been on the honor roll since she’s been there. And my son is getting married.”

She has two dogs —Tupac, a Maltese, and Gizmo, a Shih Tzu. Searson rescued Gizmo from Hurricane Maria in Puerto Rico. She’s also an avid tennis and basketball fan.

As much as she loves her work, she’s looking forward to retirement. “I’ve worked in the realm of chronic diseases for so long, it’ll be nice to learn other things.” She’s looking into perhaps starting a podcast.

Yet she’ll likely stay active in the wellness sphere in Connecticut, where she participates in “I Survived,” a quarterly rap session held by a group of Black women. “Whether it’s cancer, drug use, domestic violence or HIV,” said Searson, “it’s all on the table, and we use that as an entryway to talk about the services that are out there."

To read the 2017 Hep profile of Gloria Searson, click here.