Sherri Lewis continues to sing out loud for people living with hep C.

At the time of the profile, Lewis, who has lived in West Hollywood, California, for several years, had just completed hep C treatment. A few months later, she officially told us she was cured.

“My story hasn’t been told,” she said at the time. “A hetero Jewish white girl pop singer who had an actual moment with celebrity and success, then the downhill slide, then the success of staying alive and healthy right to this stage in life.” She added one more goal: “Beating HIV. That’s the next step.” 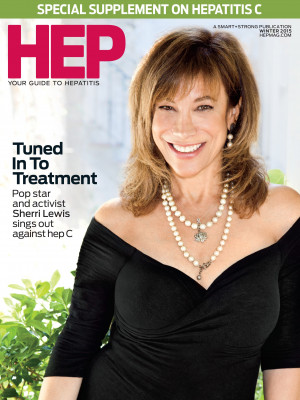 Well, that hasn’t happened yet — there’s still no cure for HIV, even though it’s easier than ever to manage for most folks — but otherwise, Lewis is hanging in there these days, devoting a good deal of her time to caring for her 90-year-old mother, who she recently moved into an assisted living facility.

“I didn’t want my mother to bury her child,” she told us back in 2015. “I can see how what I’m doing now is the right thing.” And she’s still at it, even organizing a music program at her mom’s facility to keep senior toes tapping, sometimes with her legendarily lovely voice, accompanying herself on the piano.

Thankfully, she lives right in the heart of her beloved 12-step community, so she can regularly pop out of the facility to make her meetings and also to share a meal or a performance with longtime area friends.

“They’ll say to me, ‘You need to get out and we have tickets to a show.’ I have good friends. And I’m still singing at benefits, but I’d like to sign and perform even more.” (You hear that, Los Angeles readers? Once the coronavirus crisis ends, book her a gig. Or book her now for an online performance. She’s got pipes!)

After she cleared her hep C, tests found that her liver enzymes were still “off the charts,” she said. “My liver really needed to heal. It took about six months, but slowly I started to feel normal. I had a total liver checkup recently and everything was good.”

Lewis is doing well overall. “At 65, having lived with two viruses, I’m amazed at my health,” she said. “I love my hot yoga.”

Something else special in her life? She’s now on the board of the AIDS Monument in West Hollywood. “We want to educate younger people about the history of HIV and these stories we lived through,” she said. “I want to feature stories about women and children. As hard as those years were, in some ways they were the best years, because our sense of purpose was so clear.”

Last but certainly not least, Lewis is looking for a boyfriend. “I want someone in my life,” she said. “Just for me!”

To read the 2015 Hep profile of Sherri Lewis, click here.