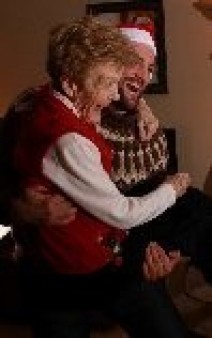 Devon celebrates the good news with his grandmother.

After suffering through a torturous chemotherapy-like 9 month experimental Hepatitis C treatment in 2012 and the first half of 2013 Devon Nicholson received an early Christmas gift at the end of 2013. He received the wonderful news that he tested negative 6 months post treatment and received a Sustained Viral Response (SVR) which essentially means that he is “cured” of the potentially deadly disease for good.

The 36 week “Incivek” triple therapy treatment that Nicholson was on consisted of 504 Incivek pills (189 000 mg’s), 1,771 Ribavirin Tabs (354 000 mg’s) and 37 Interferon injections. The treatment was still in the experimental phase for Nicholson Genotype (Genotype 2) in Canada when he began his regime however it had been approved for use on Genotype 1 patients. Unfortunately there is no government coverage for the new therapy for both Genotype’s and the powerful medications can cost between $60k and $80k for a full treatment.

Hepatitis C is known to effect more than 200 million people worldwide and now kills more people than AIDS. Many infected people do not know they have the disease as it is not part of regular physical testing. The blood to blood disease is spread mainly by infected blood products and blood tools, unsanitary tattoo or piercing tools, blood and organ transfusions before 1990, the sharing of razor blades, the use of unsanitary injection tools and military veterans and personnel who have been exposed to other blood.

Nicholson believes the disease was transmitted to him by WWE Hall of Famer Larry “Abdullah The Butcher” Shreve who has provided documents indicating he has a history of Hepatitis C. Devon was cut without permission by Shreve with an unsanitary razor blade in a 2007 professional wrestling match. The sharing of unsanitary razor blades and cutting other performers for real without consent is not common practice or accepted in the professional wrestling industry which is essentially entertainment.

Nicholson has filed a lawsuit alleging negligence, assault and battery against the legendary star known for bleeding in almost every match he had. Shreve’s Statement of Defence was thrown out in a motion in September. The trial before a jury is scheduled to take place in the Ontario Superior Court of justice the week of March 31st 2013. Nicholson will be represented by Ronald Caza of the Caza Saikaley firm in Ottawa.

Devon, a former Freestyle Wrestling National champion and Olympic trials Silver medalist in Greco Roman Wrestling lost approximately 45 pounds during his treatment due to the muscle wasting side effects. After much hard training he has gained all of it back 6 months post treatment.

Devon is back training in Greco Roman Wrestling with Coach Doug Yeates at the Tristar MMA fighting academy in Montreal. Nicholson plans to return to amateur competition this year and will return to the pro rings on May 10th 2014 in Smiths Falls Ontario at a charity Great North Wrestling event to benefit the Gerry Lowe Memorial Fund.

The news of Devon’s cure received coverage from CBC News’s website and TV Broadcast, The Ottawa Citizen and was covered on the front page of the Ottawa EMC newspaper. It was also reported widely in the pro wrestling news.