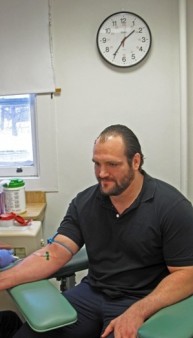 The nurse also informed me that that will be the last Virus test of the treatment and likely the last time I will be tested for the Virus for reasons other than pre-athletic medical screenings.

It certainly eases the mind to be re-assured by my nurse that the tests are going to show up negative however I am still experiencing a lot of anxiety about the results. This is mainly because I had an early viral response during my first Hepatitis C treatment in 2009-2010 but the Virus had returned when I was tested for the Sustained Viral Response (SVR) or “cure” 6 months post treatment.

I still remember the day they told me the Virus had returned very well. It was July 13th 2010 and I had been training very hard for an MMA fight that I had lined up for August. In fact I had made a full recovery from the treatment and had signed a 3 fight contract with Mixed Martial Arts company and was really looking forward to competing in that area of sports.

I remember going in to the doctor’s office and being so excited that the Hepatitis C ordeal was all over. I didn’t even think anything of the psychologist I had been seeing while on treatment sitting in the doctor’s office before he arrived. I was telling her all about how well I was doing and my plans for the future when the doctor walked in and dropped the bombshell that the Virus was back.

It was horrible news and hit me like a gun blast. I broke into tears and was totally devastated. I was even more sadden when the doctor then told me I would have to wait 5 to 8 years to be treated again, totally shattering my hopes of ever competing in professional athletics again.

I took a long walk back to my car as I was too cheap to pay for hospital parking and called both my father and girlfriend from my cell phone once I was inside. My girlfriend was horrified and the news was beginning of a rough patch between us. Unfortunately the problems lasted more than a year. Coping with the disease and the news that it was back in my system was a lot for us to handle.

My father was saddened and really did not seem to know what to say when I told him. It was a terribly sad day for me, without a doubt the worst day of my life to this point. I was very depressed for a long time after but never gave up on finding a new treatment and a doctor that would give me a second chance at a cure.The story of how I came to get on the new experimental treatment is long enough for a book all on it’s own but I am very thankful that I was given the opportunity to get on it.

The second experimental Incivek “triple therapy” treatment was 17 weeks longer than my previous treatment; I was on other medications as well as higher doses of the medications I was on the previous treatment and I was on sick leave for the majority of the treatment allowing my body to rest as much as possible and fight the disease. These are only some of the reasons I believe this treatment has an excellent chance of giving me the 6 months post treatment SVR and curing me.

Until I get the news I’m going to pay for it every day, stay positive and keep my mind on other things. Lucky for me I am extremely busy these days and have plenty of other stuff to stay occupied with.

Thank you to everyone who has been reading these blogs and watching my video’s for all the positive support for more than a year now. I greatly appreciate everything and will certainly update everyone once I find out the 6 month post treatment Virus test results.