A lot of my friends and family have heard me talk about MELD scores, but I’ve never really explained what they mean.

A Model for End stage Liver Diseases score is determined by the functionality of the liver, the level of cirrhotic damage, and pressure/clotting factors.

In my case I am at stage 4 and decompensated. My meld score hangs out in somewhere between fourteen and nineteen.

That’s what it’s a MELD score, but what does it mean?

If you have one it typically means your liver is in serious trouble. A medical professional can determine the need for a MELD score, there are online calculators, but a doc is best suited to assessing whether or not someone needs one.

It’s not a death sentence necessarily. Here’s the probability you’ll need a transplant in three months. If you can’t get that, well... then those really are mortality rates. In the chart below it takes the range of scores that can exist, and says the likelihood that you’ll need that transplant. MELD scores are not permanent they shift, constantly. 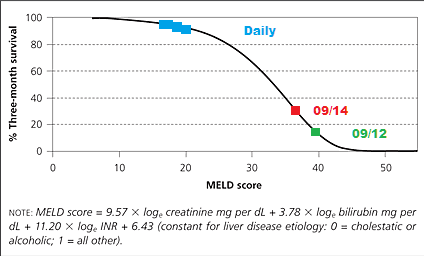 The blue area is where I generally hang out, so at in any given month I have about a 10% chance I might need a liver transplant within the next few months. It’s something I’ve lived with as a fact for about five years now. But keep that in mind, I’ve been alive these five years, well to the best of my knowledge I am.

There are two other points on that chart, represent two recent hospital visits. In September 2012 my varicies burst, and I was vomiting blood, I was lucky enough to know and understand what was going on so I caught it just in time.

Key factors you have internal bleeding where the blood is entering your GI: Black tarry stool, light-headedness (from loss of blood), easier to bruise, stomach pain(it can be mild or even unnoticeable), annnnnd blood farts. There is nothing in the world quite like ’em, and they’re the first thing I (and unfortunately anyone around me) notice.

I was in seriously bad shape that day, and my MELD shot up, ironically they thought I had C. Diff, but in fact I did not. I lost a good deal of blood, vomiting it, and i gotta say it tastes like rusty popcorn. After a quick transfusion, The trip was so hazy I don’t even remember the endoscopy where they banded the bleeding varicies . About a week afterward, my MELD score dropped in half, and kept going down.

Fast forward two years to September 2014, my most recent and longest stay yet, I was jaundice to an almost comic degree. And somehow I actually contracted C. Diff à²_ it was making the resurgence of my HCV even worse, and my MELD jumped up due to my INR hitting 1.8 and my bilirubin between 28 and 32, then slowly went down to the teens as the month passed.

I am lucky to have been able to have the resources I had when I needed them.

I am also lucky in another sense, I am the extreme. Most people with HCV will not have had the problems I’ve had in the time span I’ve had them. There is variance to the specificity but you can see some general trends:

“Most HCV patients, if untreated, are expected to develop cirrhosis at about 65 years, irrespective of the age at infection. Thus, age itself seems even more important than age at infection for predicting the occurrence of liver cirrhosis.”

"In an estimated 20 to 30% of patients with hepatitis C infection, chronic viremia results in inflammation followed by fibrosis and cirrhosis.

And for decompensated patients it’s a little more complicated, and even more uncommon so early on.

I was first assigned a MELD score when I was twenty three years old, to this day that hospital visit is one of my most vivid memories. Since I didn’t really display any other symptoms prominently, for this brief time I had compensated cirrhosis. But as more symptoms showed up I moved to decompensated status.

If what the studies I’ve read are accurate I could be looking at a (near) single digit MELD by summer’s end for SVR12, for now I’ve got about two more weeks left until I’m finished with my 24 weeks of Harvoni.