Twitter
Facebook
Pinterest
Tumblr
Email
Advertisement
Google has added a rather nifty little feature.
It now summarizes ailments and diseases using aggregated data.
It’s easy to understand why this can be a terrible idea, but considering 1 in 20 Google searches are medical related it’s not hard to understand why it was done.
For those of you not hip web-lingo, it’s a scraper.  (But the article above says it consulted with doctors! Riiiiight... maybe for those high quality images, how to interpret the data, and probably for the User Interface, but not for that data on thousands upon thousands of diseases.)
Scrapers copy content and aggregate data onto one platform, typically a website, however recently apps have become fantastic at using scrapers.
Let’s look at the present 4/12/15 Google  high-quality medical data for Hep C. 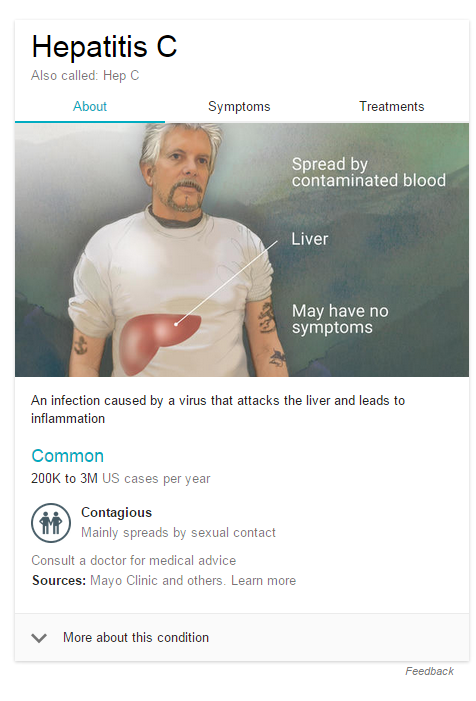 I can see a glaring issue without having to go much further. Under contagious its top listing says that it’s mainly spread by sexual contact. When you select “More about this condition” it displays below.

The three biggest methods of transmission are in order: Intravenous Drug Use, Transfusion (in the USA prior to 1992, in Canada prior to 1990), and needle stick/Health care worker exposure.
This is the principle problem with scrapers. Even it grabs the data properly, Sexual intercourse usually has the longest section when describing the transmission methods...why?
Because there is a lot of controversy around it. The biggest, most recent poll was done by the CDC in 2010, and the questions that were asked, were fairly direct.
Even in other polls that have come out through the years, this issue always comes up:  The biggest section of the Hep C population consists of Intravenous, mostly illegal, drug users. It’s far easier for someone to claim to have received it sexually than via drug use.
When studies have polled HCV patients directly, usually through a doctor, they find slightly better information, which is why we have such an interesting spread of information. They also have been examining the virus, to see how likely these claims could be. E.G. looking at the life of the virus outside the body, looking at how the HCV RNA in sperm is typically inert or non-existent. (it’s around 9% of the HCV infected male population that have it, and less than 20% of that 9% excrete enough for it to potentially be transferred)
The less likely means of transmission as in order: Vertical Transfer: mother to child (it does not go father to child), Personal items (nail clippers, razors, etc..), Sexually can even further be broken down: rough unprotected anal intercourse, rough unprotected vaginal intercourse, unprotected intercourse/rough intercourse. It is not simply by means of sexual contact, which is a much larger category.
Okay Google, now...let’s talk about how we correct this problem. There is a feedback button at the bottom for correcting mistakes.
But this is also terrible, because most of the time people who Google ailments and diseases are usually anything but experts. So the idea that an under/uninformed user is going to be able to use that feature is silly, at best. In fact, many who use this method, may reinforce what Google says by repeating their new-found knowledge to others who are under/uninformed.
The feedback method is used a lot by Wikipedia. And the correction method works for Wikipedia because often times authors/experts will correct the information using verifiable credentials.
But even still, Wikipedia’s accuracy is at the mercy of its users.
The other issue with this new presentation of information is the listing of sources. Google is borrowing the credibility of the top websites in its scraper. The Sources listing as “Mayo Clinic and others” uses a recognizable name to help a user view this information as accurate.
Ethically it should list sources, as “Sources” and not disclose any of them until the user checks the sources themselves. Not only would it allow Google a better idea as to how many of their users trust this quick medical information, but it would also allow Google to randomize the presentation of sources to encourage users to verify the medical information.
Why? Because if you see Mayo Clinic, 9GAG, WebMD and Top Ten medical facts about DISEASE YOU GOOGLED listed as sources, chances are you’ll look at the info with more scrutiny.
Right now sexual contact is still the main method of transmission listed, please Google Hep C, and help correct it. Also if you’re a medical professional, please help correct the information you know to be false. And please ask your Doc/Specialist(s) to help correct false information as well.
It’s either we do this, or I’m going to keep adding “Licking infected purple toads.” to the main cause. So that users approach the information with the caution it deserves.
While there is a lot of medical information on the web at your fingertips, always tread with caution.
Incorrect information, or half-cocked information should never be used for diagnosis. The internet can provide you with the questions you need to ask, the help of communities, and other resources to get help and better understand your options.
Misinformation for medical information is potentially deadly, and after all the internet is mostly a series of tubes.
Advertisement