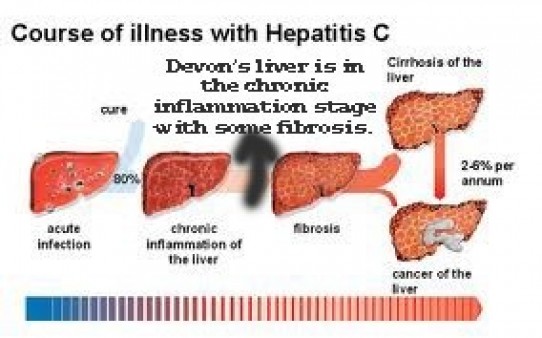 In the 7 years Devon has had Hepatitis C it has taken an effect on the liver. Some of this damage could be reversed if he is cured as the liver is the only organ with the ability to regenerate itself. If Devon is not cured doctors have told him his liver could enter the more serious damage stage of cirrhosis in the next 5-10 years.

Week 20 is a milestone week for Devon Nicholson as he did not make it past week 19 during his first treatment. Devon has lost approximately 37.5 pound due to the medications he is taking. Treatment related blood sugar issues affecting the metabolism are just one of the many possible reasons for people to lose weight while on Hepatitis C medications.

Devon is wearing Hepatitis C bracelets in this video update. Numerous celebrities who have Hepatitis C have been known to wear these bracelets including American Idol Judge and Aerosmith front man Steven Tyler (who is now cured of the disease). Actress Pamela Anderson, Keith Richards and stuntman Evil Knievel are just a few of the other celebrities who have been affected by the disease. Knievel died from Hepatitis C and caught it from one of his numerous stunt related blood transfusions.

Beyond blood transfusions, Hepatitis C can also be passed from infected surgical tools. Other blood related instruments that are can pass Hepatitis C when “unsanitary” and infected include razor blades, tattoo needles, body piercing related tools and needles

Many Hepatitis C treatment patients, like Devon during his first regime are forced to stop treatment due to severe reactions to the medications. There have been numerous cases of Hepatitis C patients experiencing fatal side effects while on treatment.

Nicholson is determined to fight through the side effects and accomplish his goal of being permanently cured of Hepatitis C.