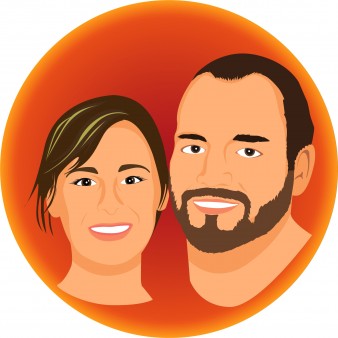 During Devon Nicholson first Hepatitis C treatment he unfortunately had a medication related “Health Scare” where he experienced numerous serious and frightening side effects all in the same day. Some of these side effects included blurred vision, seeing spots, dizziness, tingling of the limbs, numbness in the limbs, memory loss, vomiting, sweating, feeling of faintness, inability to express himself properly in speech, extreme chills as well as other symptoms. Getting through week 19 would be an impressive accomplishment for Devon to make this treatment as he did not make it past week 19 during his first treatment.

Nicholson gets into his home life during this update, interviewing his long-time girlfriend Laura, who was also with him during his first treatment. Devon’s potentially deadly health situation isn’t the only problem they’ve been having to deal with over the past few years. In July of 2012, a peace bond protection order was finally put in place against an obsessed and potentially dangerous person who was tormenting Nicholson, his girlfriend (Laura) and others close to him. In Canadian law a Peach Bond is an order from a criminal court that requires a person to keep the peace. It is similar to a restraining order and a violation of the bond is an offence under section 811 on the Criminal Code and is considered a crime.

The Crown Attorney (which is similar to a district attorney in the US) ended up intervening in the case and took over prosecution from Nicholson’s criminal lawyers. The individual the bond is against now has certain restrictions to abide to. Some of these conditions include:


Later in the update Nicholson mentions that there is currently no Canadian Government coverage for Incivek “triple therapy” treatment for Hepatitis C genotype 2 patients due to the experimental nature of the treatment. In the province Ontario the “Incivek treatment regime” is not even covered for Genotype 1 patients.

Despite now holding 2 University degrees Nicholson’s girlfriend has chosen to put her career on hold and continue working part time (32 hours a week) as a Head Life Guard and Aqua-fitness instructor at a popular local recreational facility. She made this decision in order to be able to help provide the best care for Nicholson, who has been suffering greatly from the medications many side effects.

Unfortunately the idea of keeping a part time job to avoid extra stress in her life has backfired as there is currently an ongoing investigation from both the facilities governing body and the employee Unions regarding continuing issues involving harassment, bullying, intimidation and other grievance filed against management at the facility. These allegations have been reported in unusually high numbers by reputable staff members and Laura is one of the alleged victims of this unprofessional conduct from the management department. At the time of this writing there have been about numerous official individual union grievances and one collective grievance from a number of employees regarding unpaid work. Many of the employees who have been filing reports are long time staff members with excellent reputations.

Nicholson normally works at the same facility in the fitness department however he has been off on sick leave at his liver specialist’s recommendation since December due to cognitive and physical side effects of treatment. Facility management are well aware of Nicholson’s health struggles and the potential deadly treatment side effects he is risking to be cured however many of them allegedly haven’t been making life easy on his girlfriend who is also dealing with a lot.

Everyday life doesn’t slow down or stop just because someone is on a powerful chemotherapy-like treatment and it affects everyone close to the person taking the medication. Outside life stresses can often become tougher for a person going through therapy which is why it is important to have a good support system.