Finally our VOICES being HEARD! 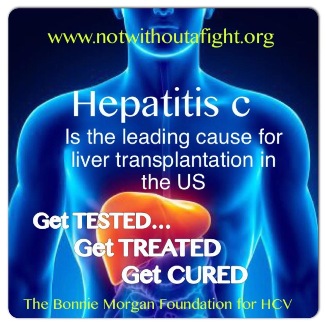 Are you like me when it comes to watching T.V and a hepatitis C commercial comes on? I get goosebumps and I am hushing everyone around me so I can hear the words talking about this disease that I have been fighting since the day I was diagnosed in 2005. I remember exactly what I was doing the first time I heard a hep C commercial. I was watching the “Voice” and folding clothes during the commercials. I had my back to the TV but heard the most beautiful, tranquil music and then a voice talked about this disease called hepatitis C. My kids screamed to me, “Hurry mom... you have to hurry. ”We all met in the hallway literally crying out with excitement... FINALLY!!!  All we could do was rewind and watch over and over again, while saying, “I can’t believe this!” Watching my kids’ excitement was very emotional for me, as these two have been fighting hep C alongside me since that first day.They are all too aware of the STIGMA tied to this disease. Then to see an actual nationally-televised commercial about the disease that was robbing their mother of energy was priceless!

Just recently I was watching the “Voice” again. (Can you tell I have a favorite show?)  A 16-year-old young lady was about to do her blind audition before the judges. During the pre-show interview she talked about herself and her family. She said, “My dad could not be here tonight and I wished he could have been, but he is at home fighting this disease called hepatitis C.” 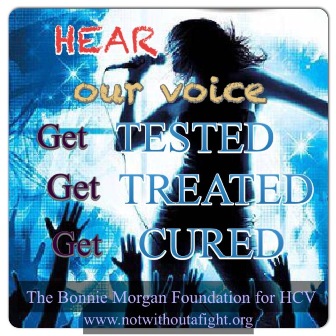 AGAIN, that was a jaw-dropping event for me. This beautiful young lady had the courage to speak out publicly about this nasty disease on national television. WOW!

Why is it we are all so shocked and emotional when such an event happens?

Let me tell you why... STIGMA!  There is such a negative stigma tied to this disease along with mis-information about it. There are millions of us struggling alone with this. Many of us are not aware what this disease is, even if we have it. Without good information, some of us become isolated or afraid to speak about it for fear of losing jobs, marriages, family, and friends. Instead, they suffer in silence.

Personally,until November 2013, I thought I was the only person in Colorado fighting this horrible painful disease. I remember going to my hepatologist appointment at the University of Colorado hospital in Denver and sitting in the waiting room looking at each and every individual person closely to see if I could find that stamp on their forehead that read “hep C.”

As I sat there, not knowing if anyone in that room was fighting this same battle or not, no one made eye contact with me. Was this because of stigma? Becuase we were afraid to be known?

My doctor assured me that over 56, 000 people in Colorado are fighting hepatitis C. Really?  Where are they?  It’s not like I sit out on the street corner with a sign saying I have hep C but seriously, where were these others I so desperately wanted to connect with? The loneliness of this disease was overwhelming. My children were great sources of support for me, and I had a few close friends who I was able to confide in about hep C. But I longed to connect with anyone who was experiencing exactly what I was feeling. Not just for support but to be reassured that I was not going crazy from the symptoms. I needed someone to “relate” to this.

It became my life mission to connect with others who were suffering from this, and to connect them with other just like them. I did not want anyone else to feel the isolation and loneliness that comes with the diagnosis. In October 2013, I began a clinical trial for late stage hep C. I was asked if I was willing to be the local “face” of hep C. I accepted without hesitation, and have been trudging forward ever since. I was not about to sit back. I could increase awareness and education about this disease. I can remember my mother struggling with this in the early 2000’s. She wasn’t comfortable about sharing with anyone that she had hep C for “fear of rejection.” She suffered in silence. To this day, many who knew my mom did not know this is what she passed away from. Many assumed it was because of her kidney issues she battled from birth. Truth is, she was afraid because of the STIGMA on how one contracts this disease. It should not matter to anyone how a disease is contracted. The fact remains.... WE ALL DESERVE TREATMENT!

Earlier this year I was at my business when I was asked to come to the front desk. Walking down the hall I could see an older woman standing with the biggest smile on her face as I approached her. She grabbed my hand before I could say hello.  “Kim, you don’t know who I am but I have been following your story on the news and in the paper...”  She began to tear up and barely able to speak... “I too have Hep C.  I have been fighting this since 1999.”   Our visit lasted 2 hours.  Since then, several others have stopped in to introduce themselves to me and share their personal story. It has been such a blessing for me to listen and connect with complete strangers as they step into my office but leave as a part of my hep C family.

Can you imagine then what the emotion and feelings are for those sitting isolated in their homes, struggling with limited information about hep C and seeing a public announcement about this?  It is truly a moving thing. On the flip side, just last week a professional news doctor on a station in California give instructions on how the recent Ebola virus is spread.  Per his words “it is contracted with the long time exposure to someone such as those with hepatitis and AIDS”...  WHAT??  Are you kidding me?  We go 3 steps forward in the public and one uneducated person standing before millions takes us back those step. This misinformation is detrimental to our fight to bring education and awareness to this disease.

It is the goal of hep C advocates to educate, bring awareness and help STOP the STIGMA that is associated with hep C.  It also means that all of us with hep C need to stand up and be a voice. This battle needs everyone to take part so we can save the lives of millions.  At the Bonnie Morgan Foundation for HCV our current campaign is “HEAR our VOICE -GET TESTED, GET TREATED, GET CURED”  “NO MORE STIGMA”

LET our voices be heard.  Encourage others to get tested.  Share your personal story and watch others begin to step up because you did.  Let’s not be afraid anymore...The time is NOW... NO MORE STIGMA

"Not without a FIGHT! ~HCV~Â© Together WE are STRONG!