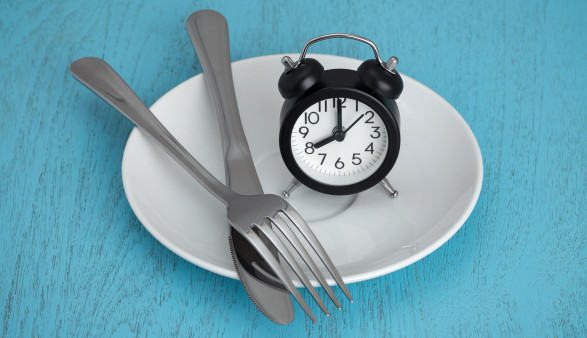 A study in mice found that eating burns more energy when restricted to certain times of the day.

November 7, 2022 • By Brian Doctrow and National Institutes of Health

Eating a high calorie diet can lead to weight gain and obesity. But the health consequences of diet depend partly on when in the day meals occur. Eating when you’re normally inactive (night for humans) encourages obesity. This suggests that obesity results in part from a mismatch between meal timing and the natural day-night cycle, or circadian rhythm. But the mechanisms by which this happens aren’t fully understood.

An NIH-funded research team led by Dr. Joseph Bass at Northwestern University studied the metabolic effects of a high fat diet in mice when feeding was restricted to either daytime or nighttime. The results appeared in Science on October 20, 2022.

Since mice are nocturnal, they normally eat at night. Mice restricted to eating only at night gained less weight than mice restricted to eating only during the day or mice able to eat at any time. The night-fed mice also expended more energy and consumed more oxygen than day-fed mice. However, the different groups ate the same amount and had similar activity patterns. This suggested that the night-fed mice burned more calories by producing more heat.

To test this idea, the researchers genetically engineered mice to boost heat production by their fat tissue. These mice did not gain extra weight when fed during the daytime versus the nighttime. The mice also had higher levels of a nutrient called creatine in their fat cells. Creatine stores excess energy during times of low energy demand and releases it to power the cell during times of high demand. But creatine can also release its stored energy as heat in a process known as a futile creatine cycle.

The team wanted to test whether creatine was behind the effect of feeding time on weight gain. So, they studied the effect of time-restricted feeding in mice engineered to be creatine-deficient. In these mice, eating only at night did not reduce weight gain or increase energy expenditure compared to daytime eating.

These results suggest that, as a result of nighttime feeding, more heat was produced from the energy stored in creatine. This, in turn, raised total energy use and reduced weight gain in the mice. It also suggests that circadian rhythms influence creatine metabolism. To test this idea, the researchers engineered mice with increased activity in genes that control circadian rhythms. These mice gained less weight on a high-fat diet and used more oxygen than control mice. They also had better glucose tolerance and increased futile creatine cycling.

High-fat diets have been shown to suppress genes involved in circadian rhythms, particularly in fat tissue. These findings give further insights into the connections between diet, metabolism, and the body’s circadian clock. They also provide an explanation for the benefits of time-restricted feeding.

“The clock is sensitive to the time people eat, especially in fat tissue, and that sensitivity is thrown off by high-fat diets,” Bass says. “We still don’t understand why that is, but what we do know is that as animals become obese, they start to eat more when they should be asleep. This research shows why that matters.”

This research summary was originally published by the National Institutes of Health on November 1, 2022.