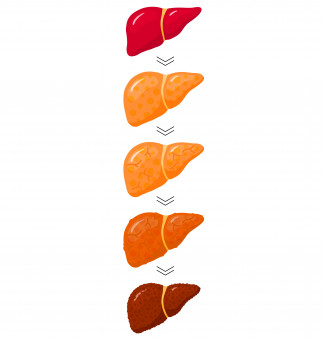 Learn more about how NAFLD progresses and eventually leads to worsening liver damage.

Fat accumulation in the liver usually progresses gradually as fat buildup triggers inflammation that eventually leads to worsening liver damage. As the liver tries to repair itself, it can develop scar tissue, known as fibrosis. There are four stages of fibrosis: mild (Stage F1), moderate (F2), advanced (F3) and cirrhosis (F4). People with cirrhosis are at risk of developing hepatocellular carcinoma—the most common type of primary liver cancer—and end-stage liver failure.

NAFLD often has no symptoms during its early stages. But as fibrosis worsens, people may experience fatigue, gastrointestinal problems and abdominal pain. People with cirrhosis may have spiderlike blood vessels, jaundice (yellowing of the skin and whites of the eyes), dark urine and pale-colored stools.

Scar tissue can block blood flow through the liver, leading to portal hypertension. Symptoms of advanced liver disease—known as decompensated cirrhosis—include fluid accumulation in the abdomen (ascites) and bleeding blood vessels in the esophagus or stomach. At the most advanced stage, when the liver is no longer able to filter out ammonia and other toxins, people may develop confusion and other mental symptoms, known as hepatic encephalopathy.

There are currently no simple tests for fatty liver disease. Blood tests may show elevated levels of ALT and other liver enzymes linked to inflammation and liver damage. Ultrasound, MRI or CT scans may be used to reveal fat in the liver. However, these scans do not show whether the condition has progressed to NASH. Transient elastography (FibroScan) and other noninvasive tests can show whether fibrosis has developed. A liver biopsy, which uses a needle to collect a tissue sample to examine under a microscope, is the most accurate way to diagnose liver inflammation, fibrosis and NASH. Biopsies may reveal liver cells “ballooning” as they fill with fat.