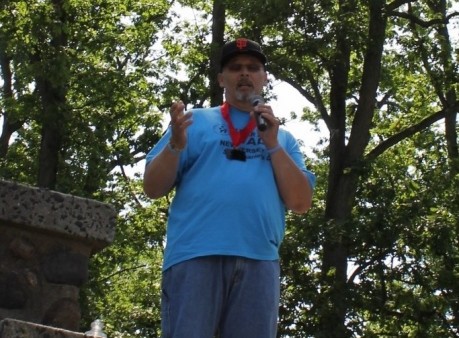 I’m Karl. I received a liver transplant in January 2013. I am doing very well.

I contracted hep C the night John Lennon was killed, December 8, 1980. Yes, I know the exact date. At that time, I was treated at a free clinic in Miami. There were no classifications back then (such as hep A, B or C). There was infectious and non-infectious. It was really bad back then when I had infectious hepatitis. I was wiped out. I was very young; 18 years old and half-dead.

It took a long time, but I got better. The disease seemed to have run its course. I had been given no treatment and my life eventually got back to normal.

Fast-forward 15 years, still not a symptom in sight. (Oh! Hep C is a patient one). I bloodied myself up at work in 1995 and required some surgery. I was married with a child and living in New Jersey. During the pre-admission testing for my work-related surgery, the doctors noticed that my liver enzymes were elevated. They told me about it and suggested I get with a GI doctor soon. I told them, “My enzymes are always high; I had hepatitis when I was a kid.” They said, “Get it checked.”

Eventually I did, mostly because my ex-wife was a nurse and strong-armed me into it. My new GI doctor informed me that I had hepatitis C. Around the same time, news of this disease was on the cover of Time magazine-I did not bother to read the article. I felt fine, fit, young and crazy. I was not sick. The doctor said I was sick, very sick. I said, “I think you got my blood tests mixed up with someone else’s.” Oops! I was the mixed-up one.

I was with that doctor until I was listed for a transplant in 2008. At one point, he said my options were very few, and my viral load was increasing. I still felt well enough most of the time. I’d get fatigued but I told myself that this was due to my work-I am a union ironworker; we build buildings and bridges-and my hard-partying lifestyle.

The doctor browbeat me into going on treatment-ribavirin and interferon. I hemmed and hawed for years, because he told me that I was not a good candidate for success due to my genotype. Also, I had witnessed a close friend go through the treatment and thought...hell, that’s worse than the disease!

By the time I got recognizable symptoms in 2008, it was too late. I try to urge people today: Do not ignore any diagnosis of hep C just because you have no symptoms.

My wife struggled with me because the more symptomatic I became, the more belligerent I was. When I carried too much ammonia, I became downright mean and dangerous, and I am not usually mean or dangerous to anyone, let alone the people I love most. During one episode, my wife had my oldest daughter record me with her phone before the police arrived. She knew from experience that after I was stabilized I would not remember a thing. Due to encephalopathy (brain damage), I have lost big chunks of memory. Poof! Bye, bye...

Meanwhile, my wife was reading everything that came out about hep C and learning more about the disease. She learned to recognize early warning signs in my behavior. She learned to enlighten the police when they responded to my condition before approaching me on these occasions. Now I ask myself: Why didn’t I just get in the car with her and go to the hospital when she would plead with me to do so?

One time when I got closer to a right state of mind, I wrote a letter to the chief of police and asked him to thank the responding officers for their professionalism. They had acquired much information about what was going on, so they didn’t kick their way in, mistake me for a drug-crazed warrior on the warpath and mistakenly nightstick or pepper-spray me into submission.

My wife helped me to do the best that I could while I awaited a donor organ-that meant a good diet and nagging me to avoid the “planted on the couch/stare at the screen” lifestyle I had adopted. Later, I would thank her for pushing me. I felt a lot better keeping my bones moving. Sometimes, though, exercise was not up for debate. I just did not have the wind in my sails to do anything.

I did not get out much. That was not always because of how I was feeling. To keep my ammonia in check, I was chugging lactulose. Lactulose, if you have not taken it, is what my family and I named “the goo.” Lactulose is the consistency of pancake syrup and the flavor of bad medicine. Lactulose keeps you moving, if you get my meaning-really, really moving. I could not get too far away from my bathroom!

That’s all history now. I still have hep C. Yeah, even though I had a successful transplant. It took 28 years for it to rear its ugly symptoms the first time. Doctors tell me that because of the cancer I got from end-stage liver disease, and because I am on meds for the rest of my life that compromise my immune system, I will not have another 28 years.

Did I mention to you that God really, really loves me? (He loves you, too.) I am the most blessed person whose writing you have ever read. I’m not with God now because he wants me to do something here. I don’t know what. I know what he would prefer I not do. Maybe he just wants me to raise my children and to trust and love him. I don’t have a burning bush.

I’ll always do whatever I have to do. To me, my life is worth fighting for, so I will. On March 10th 2014, I started a new treatment for hep C. It’s the combination of two very recently FDA-approved drugs, Sovaldi and Olysio. There are no injections (which I formerly had to give myself), no interferon, no super-nasty side effects. AND it works!

The grace of God, the overwhelming gift that an organ donor gave to me, my wife Maggie, and your love, support and prayers are the reasons I am still here. OK, so are the doctors and especially the nurses. I had end-stage liver disease. I had cancer in my liver. My daughters still have a father. I have so much to be thankful for.

What is your greatest achievement?
Learning to trust God

What is your greatest regret?
Missing my father’s 70th birthday party

What keeps you up at night?
Nothing-I sleep like a stone

If you could change one thing about living with viral hepatitis, what would it be?
Chronic fatigue

What is the best advice you ever received?
Watch your step

What person in the viral hepatitis community do you most admire?
Hep C advocate Petra Hoffmann

What drives you to do what you do?
Joy, gratitude and an overwhelming sense of in-depth service

What is your motto?
I don’t know that I have one. I hear myself saying, “Roll the dice... You’ll never know unless you try from time to time.”

If you had to evacuate your house immediately, what is the one thing you would grab on the way out?
The handle to the door. (Hopefully I am not jumping out a window.)

If you could be any animal, what would you be? And why?
A bat. Bats eat their body weight in flies and what-have-you every day. I’d consider it community service for the humans whose greed and selfishness will one day destroy our planet.