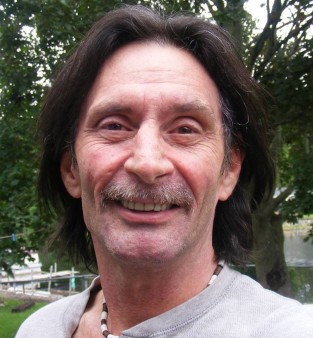 I was a busy engineer coming home from inspecting a bridge crane I designed when I was involved in a car accident. It was the beginning of the end of my engineering career. I had several compression fractures (which never really healed) and 15 other broken bones. I lost a lot of blood that day and was given a blood transfusion tainted with hepatitis C virus (HCV). I spent years trying to rehab my back so I could return to work, but by then I had accelerated degenerative disc disease. I was barely able to complete a 40-hour workweek because my back was so bad.

In 2000, I was diagnosed with hepatitis C, genotype 1a. I was told that it was very aggressive. I was absolutely devastated and thought it was a death sentence. I began my first treatment and was fully disabled by the end of the year. I applied for Social Security Disability Insurance (SSDI) but was turned down. I tried to find work that I could do from home, and I got involved with a business deal that didn’t work out. This put quite a strain on my family and me, as I had invested a lot of my own cash and time into it. Shortly after, I was told that my treatment hadn’t worked and the disease was back.

In October 2001 (yes, right after 9/11), my house caught fire and we lost everything. In 2002, I was back in treatment while fighting the insurance company and rebuilding the house. We moved into the house in 2003, and it felt good to have a new home, but I found out that treatment hadn’t worked yet again.

A month later, my wife told me she didn’t love me the way she used to, so I moved into my basement. Shortly after, I began another round of treatment and found out I had significant cirrhosis and a cancerous node on my bile duct. My wife and I reconciled, but I think it was mostly sympathy on her part. The third treatment didn’t work either, and neither did the relationship. Eventually we divorced.

My doctors treated me as if I was one of the rare ones who experienced extreme side effects and symptoms. I felt like I was a wimp so I made myself buck up and get through it like a man. In 2010, I found the hepatitis groups on Facebook and learned that not only am I not rare, but many people even had it worse than I did. Strangely, I found some comfort in that. I learned how to cope with what I was going through.

I ended up doing six treatments, the final one lasting 18 months. I finished on December 23, 2011, and was told that if I made it to June virus-free, I would be cured!

Full of hope and anticipation, I went to my July 2012 appointment, only to learn that the virus was back. My cirrhosis was getting much worse, and I had hepatic encephalopathy. My thought patterns were messed up, and I had major brain fog from the HCV medications. I won’t use interferon again, as I think it is poison for me. It may work for others, but it failed me six times now and damaged my body even further.

I hope that the new interferon-free chemo will finally rid me of this awful disease. I’ve met some wonderful people in the hepatitis C groups. They gave me support that I never got anywhere else. No one could possibly understand the strains of HCV or the treatment like the people in those groups. No one who hasn’t gone through it could understand or even guess how horrible it really is.

Now I’m waiting for the new meds and trying to be as happy as I can be and live my life in peace. I’m one of the happiest, most positive people I know. I’ve always had a great attitude and tried to have nice things to say. I look for the bright side, and if I don’t see one right away, I make a bright side. I don’t have time for complaining or feeling sorry for myself. The only thing I have time for is good people, good times, and trying to get back to just having a bad back!

What is your greatest achievement?
I designed and built the superstructure that holds the wings on the Space Shuttle.

What is your greatest regret?
Leaving California

What keeps you up at night?
Shivers and convulsions from hep C, being cold all the time, and sometimes my overactive mind

If you could change one thing about living with viral hepatitis, what would it be?
The perception other people have of it and those who have it

What is the best advice you ever received?
Stay strong and participate in the hepatitis groups because the people there understand what you are going through.

What person in the viral hepatitis community do you most admire?
There are so many, and I don’t want to make someone feel bad, but Lucinda Porter has been more than fantastic.

What drives you to do what you do?
My kids

What is your motto?
Never give up

If you had to evacuate your house immediately, what is the one thing you would grab on the way out?
My computer

If you could be any animal, what would you be? And why?
A Labrador, because who doesn’t love a Labrador?