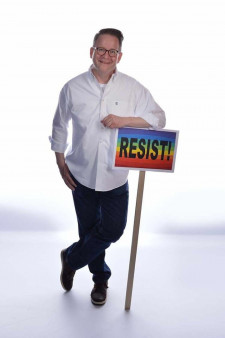 As my time with NASTAD (National Alliance of State and Territorial AIDS Directors) ends, I reflect on the past 12 years in Washington, DC, and the past 23 years working in public health. What follows are some highlights of my story working as an advocate for change. Highlights of my work with NASTAD are captured in another piece I wrote, which can be read here. For concrete tips on hepatitis advocacy, see Eliminating Viral Hepatitis: Recommendations for Action.

After graduating from Mount Mercy College in Cedar Rapids, Iowa, in 1995, I took to heart the Sisters of Mercy motto “to provide service wherever need exists” and began my first job in public health as the education coordinator for a local AIDS service organization. It was while working for the Rapids AIDS Project in Cedar Rapids that I first came to understand the toll hepatitis C virus (HCV) was taking on communities. One of my favorite advocacy partners was living with HCV and would tell me about the terrible side effects of interferon and her hope that she would one day be cured. Unfortunately, she passed away before she could benefit from the curative treatments we have today.

Another advocacy partner who I accompanied on many educational sessions was living with HIV and HCV. He taught me so much about the experience of Vietnam-era veterans and opened up to me about his substance use and the impact incarceration had on his life. In 1997, I joined the staff of Johnson County Public Health in Iowa City as an HIV outreach worker, where I facilitated group-level interventions for gay and bisexual men, people in substance use treatment and incarcerated populations. It was through conversations with people in substance use treatment and prisons that I learned so much more about the prevalence of HCV in these populations; it was a much bigger concern for them than their risk of acquiring HIV. These experiences also taught me to “meet people where they’re at” and the importance and value of second chances.

After a few years at the local health department, I became a disease intervention specialist and trainer with the Iowa Department of Public Health (IDPH). In addition to counseling and linking clients to HIV and STI (sexually transmitted infection) testing, I incorporated recommendations for hepatitis A virus (HAV) and hepatitis B virus (HBV) vaccination as well as testing for HCV. During this time, there were a multitude of services and support to assist with physical and mental health for individuals living with or at risk for HIV but very few referrals for free or low-cost hepatitis services. This was incredibly frustrating, as there were recommended vaccinations and hepatitis testing that would benefit the individuals I was serving, but there was no federal, state or local funding to cover the cost.

In 2002, I facilitated the process that led to Iowa’s first hepatitis action plan. Two years later, I was hired to serve as the state’s hepatitis coordinator. In this role, I was responsible for working with health care providers to increase HCV testing, HAV and HBV vaccination, public education, integrating HIV and hepatitis services, and facilitating the state’s Viral Hepatitis Task Force. I would regularly receive calls from uninsured Iowans asking where they could seek treatment for HCV. Unfortunately, if they could not afford insurance or did not qualify for Medicaid, very few options for monitoring or treating their HCV infection were available. Fortunately, a few providers would see uninsured patients, but the laboratory costs were often a barrier to effective management of their condition. 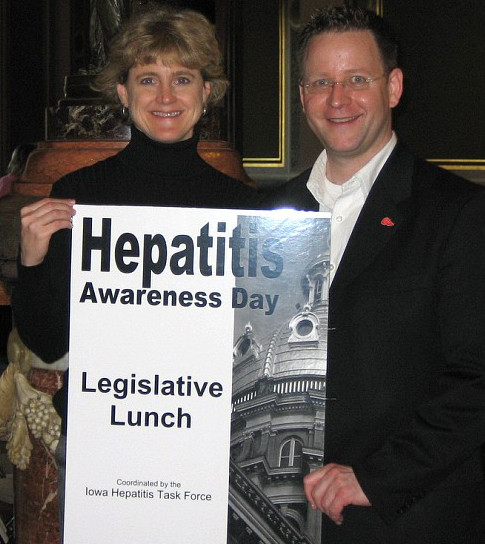 In 2005, the Iowa Legislature appropriated $90,000 for a veterans HCV awareness campaign. Over the next year, I worked with Iowa veterans to create the “Knowledge Is Freedom” campaign, which included educational materials, videos, billboards and outreach to county veterans’ offices. This experience gave me a deeper appreciation and respect for the ongoing health issues faced by so many Vietnam-era veterans. In 2006, the Iowa Legislature appropriated $120,000 annually for a hepatitis testing and vaccination program, which expanded existing IDPH projects offering adult HAV and HBV vaccination and HCV testing in local health departments and community-based organizations. I’m proud to say that these projects continue to this day.

Editor’s note: Click here to read more about the NASTAD years, which presents a fascinating history of HCV advocacy.

In 2007, I was honored to be elected vice chair of the National Viral Hepatitis Roundtable (NVHR), a coalition of organizations working to address hepatitis in the United States. Subsequently, I served as chair from 2007 to 2009. During this time, the organization led efforts to strengthen the relationship between the hepatitis B and C advocacy communities, which had historically been separate. Also, during my time as chair of NVHR, I assisted in raising funds for the Institute of Medicine report “Hepatitis and Liver Cancer: A National Strategy for Prevention and Control of Hepatitis B and C,” which was published in 2010. This report called for greater action by the federal government and is partially credited with the creation of the nation’s first viral hepatitis action plan. It is worth remembering that at this time, no one at the Department of Health and Human Services (HHS) was responsible for coordinating initiatives focused on viral hepatitis. Letters sent to HHS asking for more leadership were forwarded to the Centers for Disease Control and Prevention’s Division of Viral Hepatitis.

In 2007, hepatitis advocates from around the world organized to create a new organization with the goal of gaining World Health Organization (WHO) support for World Hepatitis Day. The World Hepatitis Alliance (WHA) was founded and U.S.-based advocates elected me as the first North American delegate to the board of directors, a position I held from 2008 to 2011. As the first board of the WHA, we set in motion the mechanism to formalize its goals and structure. This included requiring that member organizations have hepatitis as a central part of their mission and for future board members to be people living with HBV or HCV.

In 2011, after years of advocacy by WHA, WHO formally recognized World Hepatitis Day for the first time, one of only a handful of awareness days officially recognized by WHO. For the next decade, WHA provided educational materials and technical assistance to plan for World Hepatitis Day events. The organization has more recently focused on global hepatitis elimination, and, to date, nine countries are on track to actually reach elimination goals. Despite years of advocacy in the United States, because of lack of leadership from our federal government, the United States is not one of the countries on track to eliminate viral hepatitis. To further encourage U.S. action, the National Academies of Sciences, Engineering, and Medicine (NASEM) released “A National Strategy for the Elimination of Hepatitis B and C” in 2017, which outlined recommendations for the federal government to eliminate these epidemics. Despite limited funding and low priority among governments, WHA continues to grow and support HBV and HCV elimination efforts through its NoHep campaign and continued advocacy with WHO. Having the opportunity to be a part of the early years of WHA and meet advocates from around the world is an experience I will never forget.

The Cure Has Arrived

The advancements that have been made in HCV treatment over the last 10 years—from injectable interferon treatments for up to a year to all-oral direct-acting antivirals that can cure HCV within eight weeks—have been amazing! Unfortunately, as a result of pharmaceutical company pricing decisions and insurers restricting eligibility, too many people are not able to access these lifesaving treatments. The 2017 NASEM report recommends that the federal government purchase the rights to a direct-acting antiviral for use in neglected markets, such as Medicaid, the Indian Health Service and prisons. To date, the federal government has not implemented this recommendation. Eventually, it is hoped that everyone will be able to get the treatments they need, but without a total reform of our health care financing system—including a public option for all and significant drug pricing reform—Americans will continue to experience barriers to lifesaving treatments. One day we will also have a cure for HBV and HIV and must do everything we can to ensure that people living with these conditions have unfettered access to those cures too.

Not giving up. I think Dr. Martin Luther King Jr. said it best, “If you can’t fly then run, if you can’t run then walk, if you can’t walk then crawl, but whatever you do you have to keep moving forward.”

I generally try not to focus on regrets—and try instead to look forward. Though I do regret that in the past 12 years more hasn’t been done to address hepatitis B and C.

What worries me right now is knowing how much fear and pain is being experienced in the United States (and around the world), and there seems to be very little concern by policymakers and millions of Americans.

Be your authentic self.

There is no way I can name just one person. I admire everyone I have met and worked with in the viral hepatitis community for their unique contributions.

Social justice. The Sisters of Mercy taught me to “provide service wherever need exists.” I don’t agree with all Catholic doctrine—but this value is spot on!