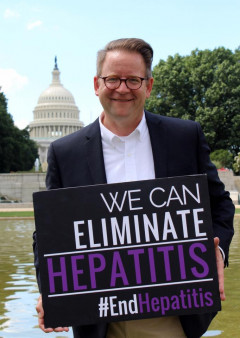 On August 2, 2018, Chris Taylor leaves NASTAD (National Alliance of State and Territorial AIDS Directors) after 12 years of service. He has been a leader in addressing issues related to viral hepatitis at the local, state, national and international levels. In addition to a legacy of significant changes, Chris leaves us recommendations for advocates, colleagues and friends who continue to work toward the collective goal of eliminating viral hepatitis and related epidemics.

After more than a decade of meetings with policymakers around the country, it remains crystal clear that people and communities who are at risk for or living with viral hepatitis need to speak up as often as possible about the burden of these epidemics and the need for an urgent governmental response. Although dedicated and talented advocacy professionals are working to improve the federal response, the power of constituent voices cannot be underestimated. Make phone calls, send letters, attend town halls and coffee meetings with elected officials, and go to campaign events and ask questions. Policymakers will not respond to these epidemics until they understand the experience of their constituents—and that it is demanded they do so.

There is always federal, state and local funding for the priorities of our government. Unfortunately, viral hepatitis hasn’t been a priority for most policymakers. Viral hepatitis prevention, research, testing and treatment deserve robust funding. Until that happens, we must continue to look to other programs that can support our efforts. Most public health funding needs to be increased; however, hundreds of millions of federal program dollars go unspent each year. It is important for hepatitis advocates to ask programs with unused funding to support hepatitis. To identify unspent funds, advocates must develop relationships with other public health programs and specifically ask whether all their funds are being used each year. If these resources continue to go unspent, advocates should approach policymakers and ask that the funds be redirected to viral hepatitis. For far too long, people at risk for or living with hepatitis have been ignored, while other health issues have benefited from the unspent funds of other programs.

For years, we’ve worked with natural partners, including allies involved in harm reduction, HIV, immunization, broader public health, etc. We should be partnering with other movements—including criminal justice reform, racial and ethnic justice organizations, immigrant and refugee rights organizations, LGBTQ communities and more—in more meaningful ways. While our individual objectives may be distinctly different, our shared passion and goal of a better world for the communities we care about should be a force for bringing us together to realize our individual and shared aims. I’m not advocating a quid pro quo where hepatitis advocates work on another issue only if that movement also works on hepatitis; rather, what I mean is, without racial justice or gender equity or dismantling the prison industrial complex, communities most impacted by viral hepatitis will continue to struggle to achieve their full potential. It’s doubtful that any one individual could be an effective advocate in all these issue areas, but if each of us were to expand our involvement into at least one broader issue area, many more people could learn about the intersectionality of their issue with viral hepatitis.

The experiences and expertise of people at risk for or living with hepatitis B virus (HBV) or hepatitis C virus (HCV) should not be underestimated. We absolutely need allies who are not at risk for or living with viral hepatitis, but we must continue to identify advocates with lived experience to be “at the table” during every conversation about advocacy, strategy and program implementation. People living with HIV coined the phrase “nothing about us without us”—and the hepatitis advocacy community should fully embrace this important guidance.

Lift One Another Up

Over the last two decades, I have found myself in my share of disagreements with fellow advocates. Sometimes these disagreements sidetracked us and took our energy away from educating policymakers about needs and funding. Disagreements and debate about strategy are a part of any movement, and respectful dialogue most often helps to strengthen strategy and improve outcomes. What is not helpful is when disagreements are driven by personal animus and misunderstandings. Because the hepatitis advocacy community is too small and lacks sufficient champions, when an advocate feels that his or her contributions, experiences or passions are not valued, he or she is more likely to leave the movement or, worse, advocate for strategies that conflict with the broader community goals. Each of us brings exceptional commitment, passion and talent to this movement. We are all unique, and so are our contributions. The hepatitis advocacy community needs all our talents to succeed. Please remember to lift one another up and resist efforts to marginalize, personally criticize or undermine the efforts of people working to eliminate viral hepatitis.

Support and Thank the Helpers 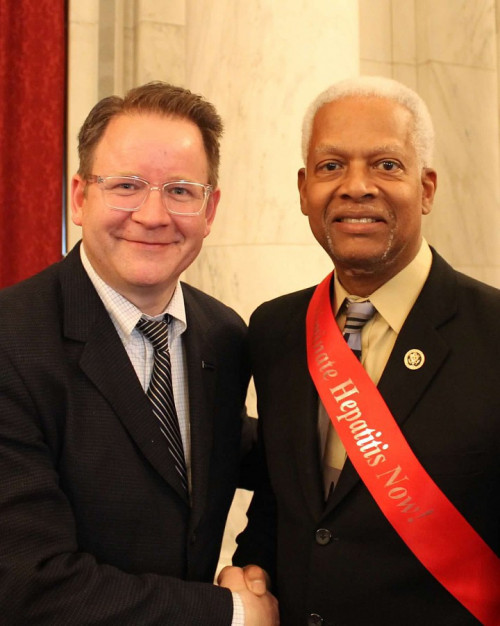 So much has been accomplished over the last two decades—but there remains much to do. Policymakers will not “do the right thing” on their own. Advocates must continue to keep the pressure on them. Educate them. Demand that funding and policies be put in place that move us closer to ending these epidemics. It gets incredibly frustrating to see the slow progress we’ve made, but we must continue working to increase the momentum. Don’t give up.

To learn more about hepatitis advocacy and Chris Taylor’s work, click on Farewell and Thank You to the Viral Hepatitis Community. Also check out Chris’s story at Hep Stories.