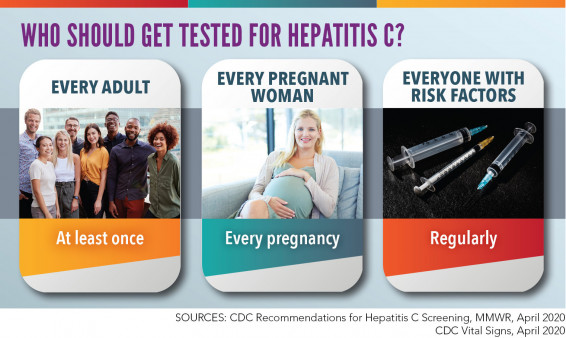 Updated recommendation includes testing for pregnant women during each pregnancy.

All adults age 18 and older should be screened for hepatitis C virus (HCV) at least once unless the local prevalence of the virus is very low, according to updated guidelines from the Centers for Disease Control and Prevention (CDC).

This brings the CDC in line with the latest recommendations from the U.S. Preventive Services Task Force (USPSTF) issued last month as well as the guidelines from the American Association for the Study of Liver Diseases.

“The CDC guidance is necessary to increase the screening and surveillance of hepatitis C so that we can identify, treat and cure hundreds of thousands of Americans who don’t know they are living with the illness and are unknowingly passing it on to their loved ones,” said National Viral Hepatitis Roundtable director Lauren Canary. “Especially at a time when liver disease and other underlying illnesses place thousands at increased risk of COVID-19, it is more important than ever to increase the screening and treatment of hepatitis C.”

An estimated 2.4 million people are living with chronic HCV, and many of them do not know they carry the virus, according to the CDC. New cases are rising most rapidly among people ages 20 to 39, largely associated with injection drug use. For this reason, the agency no longer recommends universal screening only for baby boomers (individuals born between 1945 and 1965).

Many people with hepatitis C have no symptoms or only minor symptoms, like fatigue, during its early stages. But over years or decades, chronic HCV infection can lead to serious liver complications, including cirrhosis, liver cancer and liver failure that requires a transplant. While about 25% of people will clear the virus spontaneously without treatment, the rest develop chronic infection lasting more than six months. HCV is now easily curable with direct-acting antivirals, so it’s important for people living with the virus to learn their status so they can get timely care and treatment.

The new recommendation, published in the April 10 edition of Morbidity and Mortality Weekly Report, is based on an extensive review of the latest literature and an analysis of cost effectiveness. Experts recognize that risk-based screening fails to identify everyone with HCV infection, in part due to stigma associated with the disease and injection drug use.

As hepatitis C rates have risen among younger adults, more women who are pregnant or who could become pregnant are now at risk for or living with HCV. The CDC now recommends that pregnant women should receive testing during each pregnancy.

“Patterns of opioid use have shifted the peak prevalence of persons with new chronic HCV infection from predominately older urban males from the baby boomer generation to a younger, more rural population composed almost equally of males and females,” Peter Havens, MD, of the Medical College of Wisconsin, and Jean Anderson, MD, of Johns Hopkins Medicine, wrote in a JAMA viewpoint about the updated recommendations. “The higher proportion of women of childbearing age in this newer pattern of HCV epidemiology has led to a near doubling of HCV infection in women of childbearing age from 2006 to 2014.”

In addition, the new CDC guidelines state that people of any age and regardless of local HCV prevalence should be tested if they are at higher risk for hep C. These include:

People who currently share needles or other drug injection equipment and those undergoing kidney dialysis should received routine periodic HCV testing as long as they remain at risk.

In addition, the CDC says, “Any person who requests hepatitis C testing should receive it, regardless of disclosure of risk, because many persons may be reluctant to disclose stigmatizing risks.”