Harvoni Is Well Tolerated Among Pregnant Women With Hep C

All women who completed follow-up in a small trial were cured, and none of their infants contracted the virus.

The first trial to investigate Gilead Sciences’ Harvoni (ledipasvir/sofosbuvir) among pregnant women with hepatitis C virus (HCV) found that the regimen was well tolerated. All the women who completed sufficient follow-up were deemed cured of HCV, and none of their infants have tested positive for virus.

Catherine A. Chappell, MD, MSc, an ob-gyn at the University of Pittsburgh, presented findings from a Phase I study of Harvoni among nine pregnant women at the 2019 Conference on Retroviruses and Opportunistic Infections (CROI) in Seattle. 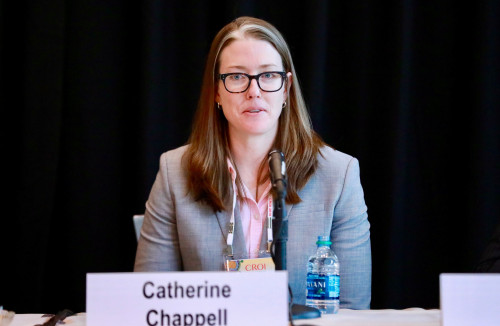 “We need to do a larger study; and hopefully, that’s coming soon, before we can widely recommend the use of direct-acting antivirals during pregnancy,” Chappell noted at a CROI press conference.

The study screened 29 women with hep C for inclusion in the trial. They needed to be 18 to 39 years old, have genotype 1, 4, 5 or 6 of HCV, carrying a single baby with no fetal abnormalities, negative for hepatitis B virus (HBV) and HIV and scheduled to deliver at the Magee-Womens Hospital in Pittsburgh.

Exclusion criteria included previous treatment for hep C with Sovaldi (sofosbuvir) or a drug from the NS5A inhibitor class, a history of cirrhosis, clinically significant drug use, a history of high risk of spontaneous preterm birth at 34 weeks of gestation and significant abnormalities in their lab tests.

Twenty-nine pregnant women were screened and nine ultimately enrolled in the trial. They were started on 12 weeks of Harvoni at 23 to 24 weeks of gestation. Then they made clinic visits during three windows: 25 to 26 weeks, 29 to 30 weeks and 33 to 34 weeks of gestation. Next they were scheduled to make further clinic visits eight weeks, six months and 12 months after delivery.

All nine women completed the Harvoni regimen, and eight of them have achieved a sustained virologic response 12 weeks after completing therapy (SVR12, considered a cure). Five women have completed the year of follow-up, and four are still in follow-up.

Five (56 percent) of the women experienced adverse health events, none more severe than grade 2. Five (56 percent) women had a vaginal delivery. The median gestational age of the infants at delivery was 39 weeks, and the median birth weight was 3.29 kilograms (7 pounds, 4 ounces). Infants remained in the hospital for a median of three days. None of the infants experienced adverse health events, and none have tested positive for hep C.

To view a webcast of the conference presentation, click here.