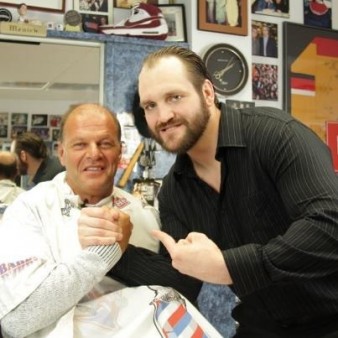 New Hepatitis C Treatment - Week 17: Weight loss and a visit with The Mountie

In week 17 (video shot on February 10th, 2013) of Devon Nicholson’s experimental Incivek “Triple Therapy” treatment he continues to suffer from sever insomnia because of the medication. Although he no longer has to consume a minimum of 20 grams of fat 3 times a day as the 12 weeks of Incivek medication is finished, Devon must still consume high fat meals when taking his twice daily doses of Ribavirin to increase its levels in his blood.

Nicholson has an impressive athletic background as a former National Champion amateur wrestlers, professional wrestler and MMA athlete however the powerful medications are taking a great toll on him physically. Devon has lost a total of 34.4 pounds since his first month of treatment in October, has suffered the muscle wasting, poor appetite and flu-like low energy side effects of treatment. He is trying his best to remain as healthy and active as possible, eating nutritious foods and supplementing with vitamins.

Although the “bug under the skin” like itching side effects have subsided with the completion of the Incivek portion of treatment, Devon is still suffering from constant “skin burning and tingling” type itching. He is also experiencing “sun burnt looking” skin type rashes and unusual welts are appearing on his skin. He has greatly limited the amount of time he spends in water as it aggravates his medication related skin conditions. This has been hard for Nicholson as he normally swims a minimum of 3 times a week.

There are several deadly side effects related to interferon and ribavirin treatment that Nicholson could experience but he is coping as best as possible. Hepatitis C impairs cognitive functioning such as memory, concentration and depression and Devon is following doctor’s advice on how to deal with the symptoms. While on treatment he’s regularly seeing a psychologist as well as taking mental health medications. He is very much looking forward to being off treatment and getting back into his normal routines.

Former WWE Intercontinental Campion and 3 times WWE tag team champion, “The Mountie” Jacques Rougeau makes a special appearance at the end of the week 17 video updated. Nicholson was trained in professional wrestling by the 2 most famous wrestling families, the Harts in Calgary and Rougeaus in Montreal. Nicholson remains close with Jacque who hopes to see Devon back in the ring again one day.