Twitter
Facebook
Pinterest
Tumblr
Email
Advertisement
26th June 2015
I woke with a mixture of excitement and anxiety this morning. My appointment to see the doctor to get my viral loads and other blood test results was at 8.45 a.m..
I had had a terrible night’s sleep. The whole family is down with the flu and I was coughing and sniffing all night. Combined with the ribavirin insomnia it meant I did not sleep well.
At the pathology clinic, where they took my blood samples, they had told me that the results could take up to two weeks to get through to my doctor. I had made my appointment at 9 days after that, who can wait two weeks???
So I got out of bed at 7.30 this morning, had some breakfast and drove into see my doctor. He had been away for two weeks so he was interested to see the results of my earlier bloods and the new ones.
First he pulled out my liver function results: ALT down from 464 two months ago to 20 last week. Gamma GT down from 222 to 67 and ALP down from 98 to 68. He shook his head and smiled. “These are fantastic result!”
Yahoo
Next: the viral load
I held my breath as he read through the results on the computer screen then turned to me with a really big smile and said, “No detectable virus load.” He smiled and shook his head again.
I almost cried. I could feel tears welling in my eyes, I do again as I write this. It has been a long, hard, rapid journey. Until this moment in the back of my mind I was worried that something might go wrong, that the virus would still be there. But no it was gone..... well not really totally gone, just at undetectable levels. I will have to keep taking the meds for another 2 months and then get a couple of viral load tests over the following months to confirm that it is completely gone. But everything is looking rosy now... everything is as good as I hoped it could be.
Below is a copy of the test results. I have removed a few identifiers such as my doctor’s name for privacy reasons. 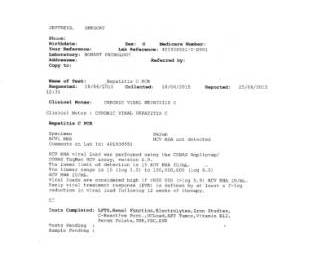 Next the Ultra Sound Results
After all that good news I was not too interested in the Ultrasound results however they were there and we looked at them. The preamble was extensive but conclusion was pretty simple and satisfying;
“Normal liver apart from one small calcified granuloma in segment 8 Otherwise a normal study”