Twitter
Facebook
Pinterest
Tumblr
Email
Advertisement
30th November 2015
I would like to start off this page with a bunch of good news... it is great that the year looks like finishing up on such a good note for we folk who do battle with Hep C.
Today a Hep friend from the USA came out to visit me in my little village by the sea in Tasmania.
I first met this guy, who we will call Mr T, through an email he sent me after reading my blog and we talked through his options.
Mr T got Hep C from a blood transfusion in 1986 after a car accident. He went through the hell of Interferon + Ribavirin treatment in the early part of the 21st century and was pronounced clear after treatment and thought he was fine until symptoms began to appear. At first, because he assumed that he had been cured of Hep C he thought it was some other issue but testing last year revealed the terrible truth that his Hep C had not been fully cleared.
Being ten years older he was not prepared to face the Interferon again and he did not have enough cash to pay the $100,000 to do Gilead’s treatment. He just figured he would do the best he could with the time left to him and eventually die from his Hepatitis.
Then he heard about generics and started researching on the internet where he came across my blog.
So we met and we chatted by email and came to the conclusion that, with genotype 1, the best thing was for him to fly out to Oz and organise to get his meds through FixHepC.
So he had flown from the West Coast of the USA to Tasmania to pick up his Harvoni equivelent from the folk at FixHepC and by coincidence I was in at the FixHep offices when he arrived, very jet lagged. We had a hug and a chat and then I had to leave.
So nearly ten days later, a week into his treatment, Mr T caught a bus out from Hobart to my little village visit me.
What a great thing it is to meet someone who a few months back was resigned to dying from Hep C because he could not afford the medicines in the USA, because the FDA was blocking his access to the generic meds that would save his life. Now here he is standing in front of me full of life and full of hope for the future. Already he was looking and feeling better. What a wonderful thing to wittness.
Mr T heads back to the US next week but before he goes he will have his blood tests and I know that those tests will show great improvements in his health because he could access in Australia the medicines that his own government prevents him from obtaining in the USA.
This is another example of how many options for folk with Hep C now!
In most countries there is no problem importing generic Hep C medicines by courier or mail order and even in the ones that prevent this most will allow people to bring meds back from overseas.
So if you can not ahve them shipped to you then you can fly to Australia or India or Bangladesh and buy a treatment of generic Harvoni or Daclatasvir and take them back home with you and in a few weeks you will be well again.
Here is a nice email from a guy from Romania who flew to Bangladesh to get Twinvir for his wife.
Hi Greg
My name is ####### from Romania, some people from here saw your blog (maybe you know ##### from Bucharest), we made a trip to Dhaka (with emotions and some adventures) and we bought the Twinvir from Incepta on 21 October. I am happy to announce to you that my wife (who is naive patient and with F2 fibrosis on Fibromax, with a viral load of 495.000) is now NOT DETECTABLE!!! after only 17 days! The other 5 patients have viral loads under 100 and they started with 1.5 millions and some of them with 16 millions! They are taking the 24 weeks treatment ( they are non responders with cirrhosis F4). So the Incepta Factory makes the right Harvoni generic! The price at the factory is around 920$, they accept only Taka (their local currency) for payment, but there are several extra costs (tips for everyone, around 100$ the taxi, the hotel, the plane tickets) but it was all worth it because we had the best news and results we could hope for! Thank you very much for your tips and efforts in helping others get the cure!
Happy Christmas to you
######
So there is Australia and there is Bangladesh and then there is the BIG NEWS. The confirmation of the release of generic Harvoni and generic Daclatasvir in India. This is the game changer because I have now got well established contacted and reliable suppliers in India I can start organising the optimum drug combos for people with all genotypes.
No more Chinese APIs, no more Ribavirin.
With Sofosbuvir plus Ledipasvir or Sofosbuvir plus Daclatasvir you have all genotypes of Hep C  covered.
Of course, being India, even after approval the actual date that shipping will commence will be around the 14th of December. And I do not know the exact prices yet but I would guess that the Sof+Led (Harvoni) will be about US$1,500 and the Daclatasvir about US$450.
Please email me for further information 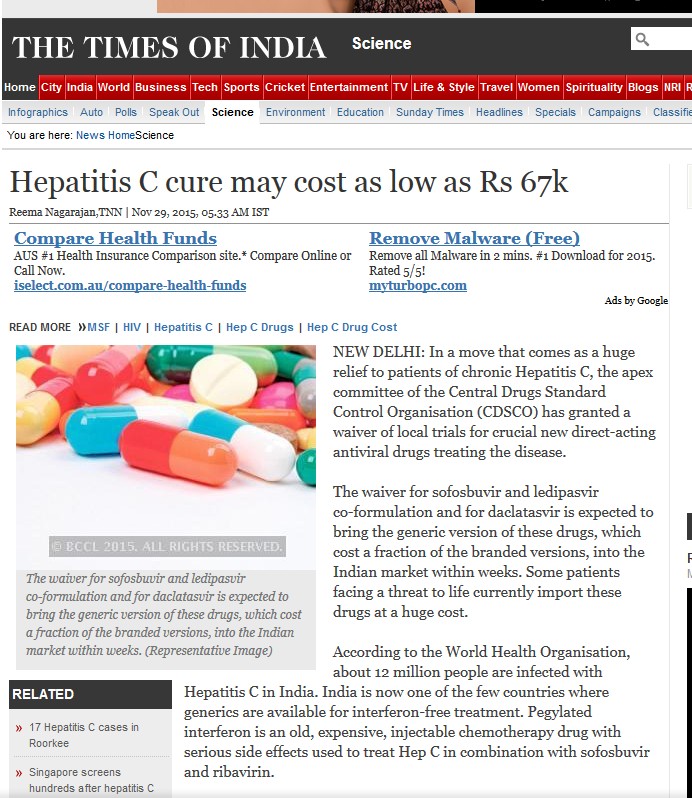