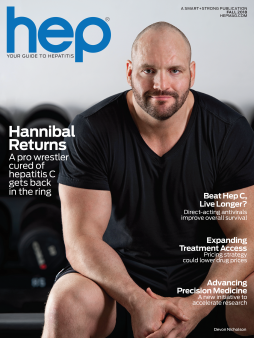 In this audio blog for the Fall of 2018, Hep C survivor Devon Nicholson, who is also known as Hannibal in the pro wrestling world, discusses getting a cover story for the international, award-winning magazine Hep.

Nicholson also discusses the last part of his Hep C ordeal involving a discrimination claim against members of City of Ottawa Upper Management with the Human Rights Tribunal of Ontario that will be heard on November 14, 2018.  That claim was in relation to his Hep C positive status and experimental treatment medications he was on in 2012/2013 and how he feels he was discriminated against by the City of Ottawa as a private citizen at the time.  Two of the Members of City of Ottawa upper management named in the Human Rights Complaint are Dan Chenier, General manager of City parks, recreation and cultural services, as well as Luc Lavictoire, Division manager of arenas and outdoor venues.  Devon won an arbitration hearing over wrongful dismissal from his part-time job in recreation with the City of Ottawa in 2016 and was awarded 25K in back pay related to that situation last year in a situation that also involved Division Manger Luc Lavictoire who was responsible for Nicholson’s wrongful termination.

Devon also talks about his recent acting jobs including a role in a “Far Cry 5” video game commercial and a few small roles in movies including one Hollywood blockbuster that was recorded recently.  He was also featured in an 8-episode French documentary series called “Les Enrager Du Ring” that aired across Canada.  Click here for more info on that show!