Hepatitis C knocked pro wrestler Devon “Hannibal” Nicholson out of the ring, but a cure landed him back in the fight.

“I was in disbelief.”

That’s how 35-year-old pro wrestler Devon Nicholson remembers learning in 2009 that he was living with hepatitis C virus (HCV). “I’d been vaccinated for hepatitis A and B and figured that I was for C as well. I was so upset because I’d worked my whole life toward this contract,” says Nicholson.

Unfortunately, there is no hep C vaccine. The contract in question was with World Wrestling Entertainment (WWE), the highest echelon of pro wrestling, the kind of “show” wrestling associated with colorful characters like Hulk Hogan and their ringside antics.

“Amateur” wrestling, ironically, is the classical mat sport pioneered in ancient Greece and practiced in high schools, colleges and the Olympics.

Nicholson had finally attained what he’d been striving toward for so long—only to have the offer rescinded when, as part of the WWE’s routine physical screening, he tested HCV positive.

The journey had begun in a suburb of Ottawa, where, as a toddler, Nicholson came under the influence of a slightly older friend his mother babysat who was obsessed with wrestling. “So I became obsessed with it too,” recalls the burly, deep-voiced Nicholson, who still lives in Ottawa.

“I bought all the toys, and every time WWE came to the area, my parents had no choice but to take me,” he says. “I never thought it was anything but a show. I knew I wanted to be a wrestler. There was never anything else I considered.”

In high school, Nicholson became an amateur wrestling champ, which led to offers from colleges. But his dream was to enter the high-glitz world of pro wrestling. So he moved to Calgary to train and ended up on the Canadian team before going on to wrestle professionally in Puerto Rico and elsewhere in the Caribbean.

It was there, in fact, that he was christened “Hannibal,” after Dr. Hannibal Lecter from The Silence of the Lambs. “They wanted to put a mask on me like Anthony Hopkins, but they said I had a crazy-looking smile,” he says. Hence, no mask.

It was then, after eight years in the business, that he got the WWE contract offer—and his HCV-positive diagnosis. He was convinced he contracted the virus from another wrestler, Larry “Abdullah the Butcher” Shreve, who was infamous for cutting his opponents with a razor. Nicholson said he’d never had a blood transfusion or injected drugs. Indeed, he had tested HCV negative shortly before being cut in the ring by Abdullah, who would cut himself with a razor and then immediately slice his opponents with it. With video to prove that, plus Abdullah’s medical records showing he’d had hep C for many years, Nicholson took Abdullah to court and in 2014 won his case, including $2.3 million in damages.

The ringside bloodletting was allowed, says Nicholson, because pro wrestling in Canada is considered entertainment, not a sport, and hence not regulated as such.

Despite the court win, Nicholson’s WWE dream was dashed. Even worse, his first hep C treatment, the then-standard interferon plus ribavirin, failed. “I was so depressed, living in a friend’s basement,” he says. “Those were the worst days of my life.”

But he wouldn’t give up. He was working as a personal trainer at the time, and a client with a medical background in whom he confided his HCV diagnosis—“I wouldn’t tell anyone else because I thought they’d think I was a drug user,” he says—urged him to go public with it. “He thought that maybe someone would come out of the woodwork and help me,” recalls Nicholson.

Several media outlets covered the story, kick-starting Nicholson’s new life as a hep C spokesperson. In 2012, he learned about the new HCV drug telaprevir, which Ottawa doctor Linda Scully, MD, agreed to put him on in addition to his old regimen. Because Canada did not cover the drug at the time, Nicholson used part of a 2012 court settlement to pay roughly $80,000 out of pocket.

Once on the regimen, he experienced insomnia and unbearable itching—the latter a common side effect of telaprevir, which, having been outstripped by equally powerful new hep C drugs with little to no side effects, was discontinued in 2014.

Nicholson had to stop working six weeks into the regimen. “But because I was public, making videos every week about my experience, I had other patients talking to me on Facebook at 4 a.m. for support.”

To make matters worse, Scully extended his excruciating treatment from 24 to 36 weeks, just to be sure, but Nicholson made it out the other side. Six weeks later, he learned he was cured, a finding that several subsequent tests have confirmed. “I was so relieved,” he says, “because I was so paranoid it wasn’t going to work again.”

Instantly, he started building his body back up, determined to return to pro wrestling. But, he says, he’s been rebuffed by WWE. “I think it’s the stigma of my having had hep C,” he says.

Yet he has managed to start a new career chapter without WWE. He formed a production company that stages pro wrestling events in and around Canada and has even revived his Hannibal character to compete in them. “I’ve had some of the best matches of my career” in recent years, he says.

Nicholson keeps busy outside the ring too. First, there’s his YouTube channel, TheHannibalTV.com, which has more than 75,000 subscribers and millions of views and pulls in income with his interviews with pro wrestling legends. He has even embarked on an acting career and has had roles in commercials and several films. And he still works part-time at a city gym just because he loves it—especially interacting with children and toddlers. “Anyone who knows me knows I’m a pretty nice person in real life,” he laughs. 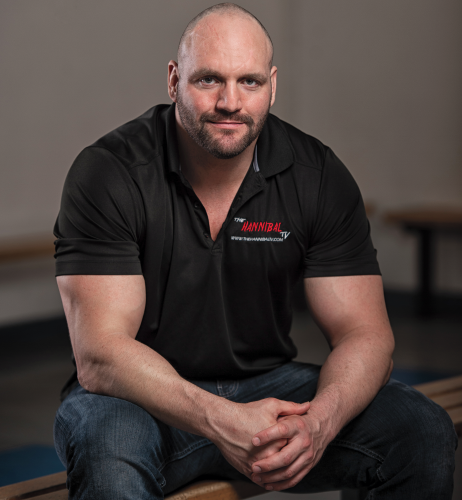 As if all that weren’t enough, he’s now training to compete professionally in mixed martial arts, a hybrid contact sport that allows striking and grappling. “I could have another five years there in a competitive environment,” he says.

In his downtime, he travels and walks his dog, Piper, a miniature poodle, with his longtime partner, Laura Pedneault-Roussel, who works in purchasing for the city of Ottawa and whom he credits with helping him through his worst times on hep C treatment.

To folks out there living with HCV, he says, “Do whatever you can to get on treatment and get cured. And don’t be ashamed of it like I was.”

He adds, “My life has been a roller coaster. But it’s proof that if you don’t give up on something, you can come out on top.”