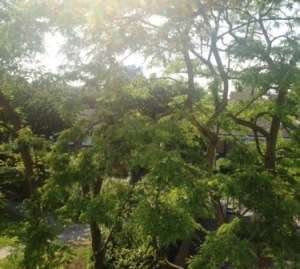 Yesterday marked one month on the proper treatment. I continued to feel better up until yesterday when I got over-tired again. I remember when Louie was doing treatment he was so excited by the changes in his body and his diminishing viral load that he’d continually over-do things and then crash for a couple of days.

For around 3 years now I’ve suffered from chronic back pain. It’s so been so bad that when I stand up I resemble one of those evolution graphics that depict how monkeys turned into men. I start off hunched and very gradually manage to get straight only after walking for a bit. In the last few days I’ve noticed the pain is better. I’m standing up straight from sitting.

I told Ivana this at clinic and she said it was my fibromyalgia disappearing with the virus.

I’m sure if someone phoned our helpline and said they had chronic back pain none of us would put it down to a side effect of the hep C. I’ve lived with that pain for so long. I’ve been to osteopaths, exercised, done yoga for back pain and nothing has shifted it until now.

I’m putting evening meetings back in my diary and I’m planning events in July, August and September.

The picture is the view from my window. It’s nice to look out on trees.

This entry was originally published June 6, 2013 on The Hepatitis C Trust. Reprinted with permission.