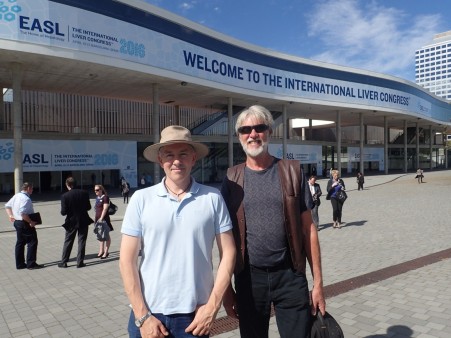 Barcelona and the 2016 EASL Conference.

Twitter
Facebook
Pinterest
Tumblr
Email
Advertisement
The EASL Liver conference has been running for 30 years, for the first 20 years it had a policy of little or no corporate sponsorship and had attendances of around 2,000 health professional at it annual event.
About ten years ago it changed its position and now Gilead and Bristol Myer Squib and other big international drug companies are major sponsors. (Not a surprise given that they are also major sponsors of many of the liver specialists who attend EASL).
In the last ten years the attendance at EASL as risen to about 10,000 people. I believe that the full week costs about $2,000... so do the sums. EASL is a now a BIG business in its own right.
So I went to EASL yesterday and today. I went and listened to Dr Freeman’s press conference, his presentation was brilliant but there were only about eight media people there and most were cub reporters. One had been put in at the last minute and did not know a thing about Hep C or the new drugs.
There was no-one there from the mainstream media or any of the large news services. I was rather disappointed but Dr Freeman took it all in his stride.
I can not mention anything about Dr Freeman’s presentation because there is a media embargo on it until Sunday the 17th of April, at which time I will post it.
I should say though, that it will change the way people think about generic Hepatitis C treatment. There are big changes afoot folks. Big Pharma is trying to crush this movement but it will come through.
Advertisement