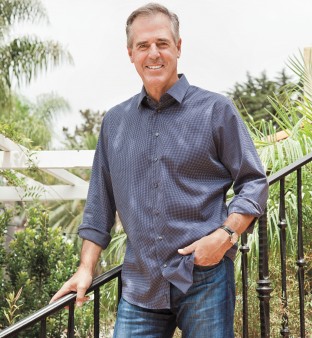 In many ways, you could say that Rolf Benirschke, 61, led a completely charmed life until his early 20s. He grew up the handsome, privileged son of a Dartmouth College medical professor and excelled in sports.

Benirschke was such a good kicker that he was courted by the University of California at Davis and was drafted into the National Football League (NFL), playing first for the Oakland Raiders and then for the San Diego Chargers under the renowned coach Don Coryell.

In 1978, fate took a turn. During his second season with the Chargers, Benirschke was diagnosed with Crohn’s disease, a bowel disease that causes inflammation of the lining of the digestive tract, which can lead to stomach pain, severe diarrhea, fatigue, weight loss and malnutrition—and can be life-threatening.

“I collapsed on a plane flying home from a game,” Benirschke says. Also diagnosed with ulcerative colitis, he had his colon and part of his intestine removed in surgery. He needed almost 80 units of blood to survive. He was in an intensive care unit for almost six weeks, lost 65 pounds and left the hospital with two ostomy bags. “The Lord intervened, and I was allowed to live,” he says. With no more colon, he was essentially cured.

Yet just barely—or that’s what it felt like at the time for Benirschke. “I thought, Why didn’t I just die? I can’t see my life being of any value or fun now,” he says. “I certainly thought I could never play football again or ski, scuba dive, bodysurf or play tennis. I was single, and I liked girls, and I was pretty sure nobody would be interested in me.”

Thankfully, the Chargers took him back. “It’s remarkable the owner and the coach gave me another chance, because there were 100 kickers waiting in line behind me,” he says. He wore ostomy bags for the next four years until a new surgery created an internal pouch, which allowed him to stop using the external bags.

He was named the NFL’s Comeback Player of the Year in 1980 and its Man of the Year (now called the Walter Payton Award) in 1983. He played a decade for San Diego and was the third most accurate kicker in NFL history when he retired in 1987.

Amid all that football, he also became an advocate for people living with Crohn’s and colitis. “Wherever we would play,” he recounts, “local sports writers would cover my health ordeal, then patients or families who’d read the stories would write me letters: ‘How can you play football with an ostomy bag? I’m trying to go to school, hold down a job, travel.’ I realized nobody was talking about Crohn’s, so I started speaking publicly about it. That changed my life, encouraging patients. I helped create a major program for an ostomy manufacturer that ran for 36 years.”

He also started a family. In 1990, after joining a financial services firm and even doing a stint as host of Wheel of Fortune, he got married to Mary, a speech pathologist. They have four children, including two boys adopted from Russia and a daughter with mild cerebral palsy and Asperger’s syndrome. “We’ve had our challenges parenting,” he says.

Along with those new challenges came yet another. In 1998, while applying for life insurance, Benirschke learned he was living with hepatitis C, likely a result of those 80 units of blood he had transfused during his Crohn’s surgery, which predated screening blood products for hep C.

“I thought, Lord, I’ve already learned so many lessons, why are you doing this to me?” Benirschke says. “I was scared. I had a wife and four kids depending on me, and I think I’m going to die. I felt dirty. I was worried about infecting my wife and kids. It was horrifying.”

His doctor put him on an interferon and ribavirin trial, daily self-injections of a maximum dose for an entire year. “I had extreme fatigue, shakes, fever, chills, aches, extreme sensitivity to light and irritability,” Benirschke says. As a result, he started taking an antidepressant. The treatment worked while he was on it, but his virus rebounded.

After a second round of treatment, the same thing happened. Benirschke’s morale was at an all-time low. “I was a two-time loser,” he says. “I wore out my poor wife, who’s trying to raise two young boys. I would come home and have to lie down, leaving everything to her.”

Benirschke waited a few years until trying another hep C treatment. In 2005, he went on pegylated interferon plus ribavirin, which had less than a 50 percent success rate. The third time was the charm. At the key marker, six months after treatment, his hep C was still cleared. “I broke down when I got the news from my doctor,” he says.

Although he was free of both Crohn’s and hep C, Benirschke made it his life’s work to educate others and lend support. He became a public speaker on hep C to help break the stigma around the disease. Seven years ago, he started Legacy Health Strategies. With medical device makers, drugmakers and hospital systems as his clients, his company offers patients facing major surgeries education and decision-making support, complete with nurse navigators.

Benirschke is a believer in the newer hep C treatments. “I look at it now and shake my head,” he says. “I always tell patients how fortunate they are to have no major side effects.”

Despite all he’s been through, he’s grateful. “My company has 25 employees, and we get to work with new technology to help change lives,” he says. “I’m doing a lot of motivational speaking about my personal journey. I golf, I’m still happily married and we love to travel.” In recent years, with their kids grown, he and Mary have visited Africa and Europe.

Having turned several life challenges into business opportunities that allow him to help others, Benirschke is back to feeling that he lives a charmed life. Or, as he puts it: “I really feel like the luckiest guy in the world.”