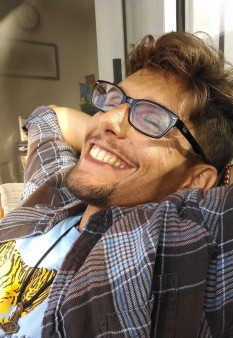 It was summertime, and I was going into seventh grade. After a day of playing tennis and drinking sugary drinks, I went home and sprinted to the bathroom. Strangely, my urine filling the bowl was tea-colored. My dad said, “We need to get this checked out.”

Fast forward: some new doctors, some new tests. Was it my kidneys? No. My spleen? No. My liver? Yes. What did the biopsy say? None of us really knew what to expect when we met with the doctor that day, but the tests revealed that I had hepatitis C (HCV). At the time, generalist doctors knew little about HCV, so the information he gave us was minimal. The room went quiet until my parents probed him for information. He said that at the rate my disease was progressing, if I didn’t clear hepatitis C with treatment, I would likely need a liver transplant by age 30. Moreover, even with a transplant, hepatitis C would re-infect my new liver.

Sports were suddenly out of my life as I could no longer overexert myself and put additional stress on my liver. How had I gotten hep C? The doctor asked my family for blood tests, and within a week, he called us in. It turns out my mother had hepatitis C too and had given it to me during pregnancy. This is known as vertical transmission. My mother would end up going on two hep C treatments while I was in school. Each treatment she went through gave me a glimpse of the insane side effects and pain she suffered from interferon. This wasn’t just my mother’s pain; it was also mine.

As years passed, I too began treatment. I was only 18, so the gastroenterologist’s staff was surprised to see me. I stood out like a sore thumb in the GI’s office, which was filled with so many geriatrics that they called the 60-year-olds “whippersnappers.” I didn’t respond to my first treatment, which wasn’t just tough on me but took its toll on my fiancée, my friends, and my job. It was my own personal hell. Each month, my viral load results hovered around three million. The failure of my treatment was hard on me, coupled with the end of my engagement and the news that I would need another semester at school. I felt lost and defeated.

I refocused, began eating healthier and working out more, and got a new job. Two years later, hep C treatment failed me once again. Internal bleeding and new symptoms indicated that my liver was decaying. Just as I had done before, I refocused on trying to get healthier. My next job was in the corporate world. In addition to providing me with affordable health insurance, they accommodated the many doctor appointments I had. Just after starting the job, I saw my mom go through her roughest treatment yet—the triple cocktail using peginterferon, ribavirin and Incivek. The medications made her anemic, so she would need two blood transfusions to keep her going. However, she responded to treatment, and her viral load became undetectable, meaning she was cured. I was elated, not only because my mother was clear of the virus, but because it meant new hope for me as well.

A dear friend who is a nurse, triathlete, and cancer survivor helped me get in to shape for my next treatment. In addition to working out with me, she helped me establish better eating habits and routines. I prepared for months preceding my treatment start date, and I was in the best shape I had ever been. Within a month after starting treatment, my viral load plummeted from over 9 million to just 220. I felt like I was dying, but the results were fantastic. My viral load stayed below 40 for the next nine weeks. However, esophageal varices in my throat burst. Esophageal varices are enlarged veins that occur with cirrhosis, and sometimes HCV treatment will make these worse. Not only would I lose a third of my blood within a few hours, but also any hope of continuing on treatment.

Last year the symptoms began interfering with my brain. My esophageal varices and portal hypertension (high blood pressure in the liver) had new company: encephalopathy (mental confusion caused by high level of toxins in the blood), ascites (accumulation of fluid in the abdomen), and jaundice (build-up of bilirubin in the blood which causes yellow skin and eyes, dark urine, and clay-colored stools). As my MELD (a measurement of the degree of liver damage) went up, I desperately needed a new treatment.

If I am anything, I am persistent. I have recently begun my fourth treatment, taking Sovaldi and Olysio, and my liver function tests are better than they have been in a long time. You can follow my progress on my blogs (blogs.hepmag.com/ricknash and canythingbutaverage.blogspot.com). I began blogging during my last treatment, so I could keep my friends and family informed. I hope my blog will help those who are going through similar troubles and that my story inspires and helps others.

What three adjectives best describe you?
Compassionate, passionate, and resilient

What is your greatest achievement?
My amazing group of friends

What is your greatest regret?
Not spending more time with my Grandpa

What keeps you up at night?
The thought of infecting those close to me

If you could change one thing about living with viral hepatitis, what would it be?
Other than not having it, not being able to give it to anyone else

What is the best advice you ever received?
Laughter is what fear is afraid of

What person in the viral hepatitis community do you most admire?
Naomi Judd

What drives you to do what you do?
Inequality. I abhor it with every fiber of my being.

What is your motto?
Solvitur Ambulando (It can be solved by walking, implying that the simple/practical solution is often correct.)

If you had to evacuate your house immediately, what is the one thing you would grab on the way out?
My meds: I’m on treatment, and I’ve got a handful of tomorrows to live for.

If you could be any animal, what would you be? And why?
A raven. They’re cunning, strong leaders, creative and devoted to their friends and family.