A high HIV viral load and a low CD4 count are each independently associated with liver fibrosis progression among people living with the virus, including those who are coinfected with hepatitis B or C viruses (HBV/HCV). Researchers analyzed data on 14,198 HIV-positive individuals in medical care between January 2000 and March 2014 who were a part of the CNICS Cohort and who did not have significant liver fibrosis at the outset of their participation in the study. Findings were presented at the 2016 Conference on Retroviruses and Opportunistic Infections (CROI) in Boston.

Eighty-two percent of the study population was male, 58 percent had sex with men as their risk factor for acquiring HIV, 15 percent was coinfected with HCV, and 9 percent had an alcohol use disorder.

A total of 1,386 individuals (10 percent) progressed to advanced fibrosis during a median three years of follow-up, during which the study group as a whole contributed 61,904 person-years of follow-up (person-years are the cumulative years participants spend in a study). This meant that, per year, 2.2 percent of the cohort as a whole and 4.7 percent of the HIV/HCV-coinfected group progressed to advanced fibrosis.

“Our findings suggest that early treatment of HIV infection could mitigate liver disease,” the researchers concluded. 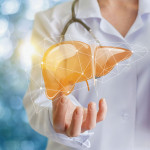