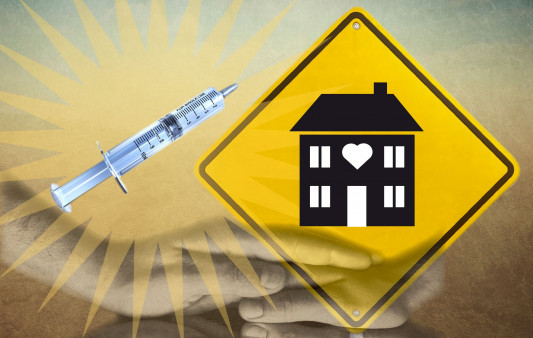 Now that the dam has broken, it may not be long before additional overdose prevention centers open around the country.

On November 30, New York City won the years-long race to open the first government-sanctioned supervised injection facilities in the United States. During their first few days in operation, staff at the two new sites have already reversed several drug overdoses.

For more than 29 years, we have dedicated our lives to ending #overdose deaths & the criminalization & stigma associated with substance use. Being the 1st OPC site in the US is an honor & incredible step forward in ending the #overdosecrisis #wearethemedicine #THISSITESAVESLIVES pic.twitter.com/3NuuDCSh9C

Supervised injection facilities—also known as safe consumption sites or overdose prevention centers—allow people to use drugs under the watch of trained staff, reducing the risk of overdose death. Prompt administration of Narcan (naloxone) can quickly and safely reverse an overdose of heroin, fentanyl or other opioids.

Safe injection sites provide clean syringes and other injection equipment, which prevents transmission of HIV, hepatitis B and hepatitis C. Indoor sites also reduce street drug use and discarded needles. Finally, they offer an entry point for medical care, HIV and hepatitis C treatment, addiction treatment and other services for people who use drugs.

The news couldn’t come at a better time, as the Centers for Disease Control and Prevention (CDC) recently reported that drug overdose deaths exceeded 100,000 between April 2020 and April 2021—the highest annual toll ever—representing a 29% increase during the COVID-19 pandemic. More than 2,000 people died of overdoses in New York City during 2020, and the numbers for 2021 may be even higher.

Some community residents have raised concerns about the decision to place the sites in low-income neighborhoods, but health officials felt the need to move forward to address the burgeoning overdose crisis.

“Every four hours, someone dies of a drug overdose in New York City,” health commissioner Dave Chokshi, MD, told The New York Times. “We feel a deep conviction and also sense of urgency in opening overdose prevention centers.” Chokshi told NPR that the health department has made arrangements with the New York Police Department to allow people to use the sites without fear of arrest.

Outgoing mayor Bill de Blasio, a champion of safe injection sites, said in a statement that New York’s decision would show other cities that “after decades of failure, a smarter approach is possible.” In the three days since the sites opened, he said, staff had already reversed nine overdoses.

As of yesterday, we have already reversed 9 overdoses at our prevention centers. https://t.co/tcalIxgx3K

The first sanctioned supervised injection site in the United States is a long time coming.

There are currently more than 120 such sites in at least 10 countries, according to the Drug Policy Alliance. The first sanctioned site in North America, Insite, opened in Vancouver in 2003. At least one unsanctioned underground site has been operating in an undisclosed U.S. city for several years.

Philadelphia appeared to be on track to open the first sanctioned U.S. site last year, but neighborhood concerns and federal legal opposition put those plans on hold.

The Department of Justice maintains that supervised injection facilities violate a provision of the Controlled Substances Act that makes it a crime to operate a site where illegal drugs are produced, distributed or consumed. Safehouse, the nonprofit group seeking to open the Philadelphia site, filed a Supreme Court appeal, but in October, the high court declined to hear the case.

Other cities, including Baltimore, Boston, Denver, Seattle and San Francisco, have also been trying to open supervised consumption facilities.

San Francisco’s effort has been stymied by failure to pass a state law that would allow cities to open pilot safe injection sites. Legislators reintroduced the bill after former governor Jerry Brown vetoed the legislation in 2018, but it has been plagued by delays. Local officials are not waiting, however, declaring a state of emergency around the city’s drug overdose crisis and taking steps to purchase a building that could house such a site.

In the face of federal opposition—and with no clear indication that the Biden administration will look more favorably on supervised injection sites than the Trump administration did—city officials and advocates appear to have been waiting for someone to go first.

Now that the dam has broken, it may not be long before additional sites open in New York City and elsewhere around the country. For example, Alyssa Aguilera of the AIDS advocacy group VOCAL-NY told The New York Times that her organization hopes to open an overdose prevention center in Brooklyn.

“I think that’s going to give folks courage,” Kassandra Frederique of the Drug Policy Alliance told NPR. “I think there are a lot of phone calls happening right now with folks figuring out, OK, like can we do this as well?”

Click here for more news about the opioid crisis and hepatitis C among people who inject drugs.