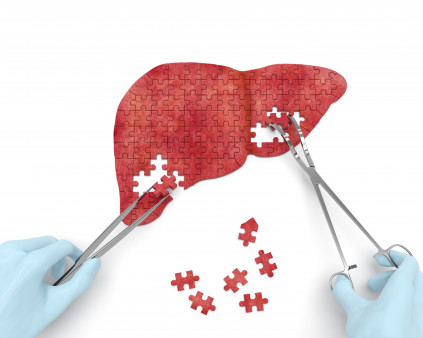 No significant links were found between liver stiffness prior to antiviral treatment and cirrhosis, liver cancer or transplants or death.

Greater liver stiffness measurements via FibroScan following antiviral therapy for hepatitis C was linked to a higher incidence of decompensated cirrhosis, meaning liver failure due to cirrhosis. These findings were published in Alimentary Pharmacology and Therapeutics.

Over time, hepatitis C virus (HCV) can lead to liver fibrosis (scarring), cirrhosis and hepatocellular carcinoma (HCC), the most common type of liver cancer. An imaging method know as transient elastography, or FibroScan, measures liver stiffness, an indicator of fibrosis.

Liver stiffness is known to decrease after commencing direct-acting antiviral therapy for hep C because it reduces hepatic inflammation and fibrosis, but the effects of greater liver stiffness after treatment are not well understood.

George Iaonnou, MD, of the Veterans Affairs Puget Sound Healthcare System and the University of Washington in Seattle, and colleagues conducted a study of United States veterans to identify any such associations. They looked for any links between liver stiffness and all-cause mortality or people developing HCC or decompensated cirrhosis or requiring a liver transplant as well as all these events taken into account together, which was considered the composite outcome.

The researchers used electronic health records from the Veterans Affairs Corporate Data Warehouse, which is maintained by the Veterans Health Administration. They selected 1,245 male patients with hep C who had received antiviral therapy before 2015; 492 of them had received a liver stiffness test within a two-year time period before receiving treatment, and 877 had done so after. Of the total study population, 124 patients had reported liver stiffness measurements both before and after receiving antiviral therapy. The patients were also categorized on the basis of their liver stiffness measurements into those with values of up to 12.5 kilopascal (kPa), between 12.6 and 20 kPa and those over 20 kPa.

Among the patients in the posttreatment group, 21 (2.4%) developed decompensated cirrhosis, 26 (3%) developed HCC and 57 (6.5%) underwent liver transplantation or died over a follow-up period of 27 months. Patients in the same group with a liver stiffness greater than 20 kPa were more likely to develop decompensated cirrhosis and the composite outcome compared with those having a liver stiffness of up to 12.5 kPa.

Among those patients in the pretreatment group, 14 (2.8%) developed decompensated cirrhosis, 19 (3.9%) developed HCC and 33 (6.7%) patients died within a follow-up period of 35 months. There were no liver transplants in this group. The researchers reported no significant links between pretreatment liver stiffness and any of the outcomes.

The researchers admit that these findings need validation in a female population. Further, given the limited number of participants for whom both pre- and posttreatment liver stiffness measurements were available, determining direct differences in associations was impractical.

Despite these limitations, the researchers suggested, “In patients with HCV treated with antiviral therapies, obtaining a posttreatment liver stiffness measurement may be beneficial in identifying patients at risk for long-term adverse outcomes.”

Click here to read the study in Alimentary Pharmacology and Therapeutics.