Left untreated, hepatitis C can lead to cirrhosis, liver cancer and the need for a liver transplant.

Hepatitis C can easily be cured with direct-acting antiviral therapy, but less than a third of people living with the virus are getting the treatment they need, according to the latest Centers for Disease Control and Prevention (CDC) Vital Signs report. What’s more, people who have health care coverage through Medicaid or Medicare are even less likely to receive timely treatment.

“Everyone with hepatitis C should have access to lifesaving treatment, regardless of race, ethnicity, age or insurance status,” said CDC acting principal deputy director Debra Houry, MD, MPH. “What these data tell us is that, at best, only one in three people are treated within a year of being diagnosed and we must reduce the barriers and get more people treated for hepatitis C in our country. This is critical to stop preventable deaths and prevent new infections.”

More than 2 million adults in the United States have hepatitis C virus (HCV), and incidence (new cases) continues to rise, according to the CDC. In 2019, hepatitis C contributed to the deaths of approximately 14,000 Americans. Black and Latino people have higher HCV-related mortality than white people (5, 4 and 3 deaths per 100,000, respectively).

Over years or decades, chronic hepatitis C can lead to serious complications, including cirrhosis and hepatocellular carcinoma, the most common type of liver cancer. Left untreated, it can lead to liver failure and the need for a liver transplant.

Guidelines recommend that all adults should be tested for HCV at least once, women should be tested during each pregnancy and those at highest risk should be tested regularly. This includes people who inject drugs, HIV-positive men who have sex with men, and gay and bisexual men who take HIV pre-exposure prophylaxis (PrEP). But many people remain unaware that they have hepatitis C, limiting their access to treatment.

More than 95% of people with hepatitis C can be successfully treated with direct-acting antivirals (DAAs), well tolerated oral regimens usually taken for 8 or 12 weeks. DAAs first became available in 2014, but nearly a decade later, treatment is still not readily available for everyone living with HCV, in part due to its high cost and state restrictions on who can get it.

As described in the latest Morbidity and Mortality Weekly Report, CDC researchers analyzed data from HealthVerity, an administrative claims and encounters database, for adults ages 18 to 69 who were diagnosed with hepatitis C between January 2019 and October 2020. The 47,687 people included in the analysis all had some type of continuous insurance coverage for at least two months prior to their HCV diagnosis and for at least a year thereafter.

Not surprisingly, among Medicaid recipients, the likelihood of receiving treatment was lower in states with restrictions on access, such as only treating those with more severe liver fibrosis, requiring a period of abstinence from alcohol or drug use, or limiting which providers can prescribe DAAs. 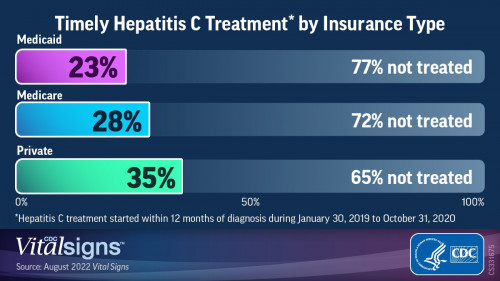 After adjusting for type of insurance, treatment initiation was lowest among younger adults (ages 18 to 29 and 30 to 39) with Medicaid or private insurance, compared with those ages 50 to 59. Black people were also less likely to receive treatment than white people.

But the news may be even worse. This study did not include people who don’t have any insurance coverage at all, and that group likely has even less access to treatment, Carolyn Wester, MD, MPH, director of CDC’s Division of Viral Hepatitis, told reporters during a media briefing.

“People shouldn’t have to jump over hurdles to access lifesaving, cost-effective treatment,” Wester said. “Removing barriers to treatment is a critical step, as is increasing screening for hepatitis C. We estimate about 40% of people with hepatitis C in the U.S. are unaware of their infection—testing is the first step to accessing curative treatment.”

Since DAAs were first approved, advocates have been working diligently to remove barriers to treatment access.

“The advocacy community has worked hand-in-hand with policymakers and health officials at the federal, state and local levels to make sure that people who are living with hepatitis C get the treatment they need, in order to stem the tide in hepatitis C-related deaths and infections,” Robert Greenwald, of the Center for Health Law & Policy Innovation, and Adrienne Simmons, of the National Viral Hepatitis Roundtable, said in a statement. “While important progress has been made, there remains much work to be done to realize viral hepatitis elimination.”

Some say the CDC could be doing more to ensure greater access to treatment.

“We applaud the CDC for releasing this data and calling attention to the shortfalls in our healthcare system as it relates to hepatitis C treatment,” said Carl Schmid, executive director of the HIV+Hepatitis Policy Institute. “While payers need to lift access restrictions, the CDC also needs more resources to adequately ensure people and providers are educated about hepatitis and that testing and linkage to curative treatments occurs. In order to implement the Viral Hepatitis National Strategic Plan for the United States: A Roadmap to Elimination 2021-2025 significant funding will be necessary.”