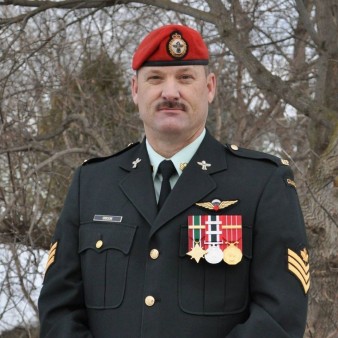 The year 2009 was going to be great. I was looking forward to retirement from the Canadian Armed Forces, a new career in the private sector, and the purchase of a first home. However, things changed drastically when my medical release revealed that my liver was cirrhotic, a result of the hepatitis C virus (HCV). My name is Lance Gibson. I am a retired Military Police Sergeant who was trained to face a multitude of external threats during my time with the Canadian Armed Forces, including a tour in Afghanistan. The last thing I expected was that the biggest threat to my life would be internal.

The Hep C Stigma
Hepatitis C is a potentially deadly virus that attacks the liver. It is the leading cause of liver cancer in Canada and one of the few cancers that is increasing in numbers. There is a lot of misconception and ignorance about HCV among the public and (surprisingly) the medical community. Following my diagnosis, medical staff bombarded me with accusations of using intravenous drugs and engaging in promiscuous sexual activity as likely reasons for contracting the disease. I assured them that I have never done either. A detailed medical review eventually confirmed that I had contracted the virus when I received a platelet transfusion as a teenager. Hep C had been silently ravaging my liver for nearly three decades.

Over the next several years, my health deteriorated to the point that I needed a liver transplant to survive. Fortunately, my sister volunteered to be a living donor. She saved my life by donating a part of her liver. But HCV remained, and unless it was eradicated, it would attack my new liver, too.

Approximately a year after my transplant, I responded to a Facebook post from the Canadian Liver Foundation (CLF) looking for hep C patients to share their stories. It was part of CLF’s awareness campaign to encourage adults born between 1945 and 1975 to get tested for the virus. Due to the stigma surrounding hep C, it was difficult to speak out at first. However, the support I received from my family, coworkers and medical community convinced me that I was doing the right thing. The first awareness campaign led to many other interviews, as well as opportunities to educate the medical staff where I worked. Later I participated in a documentary about the HCV epidemic, Deal With It: Untold Stories of Hepatitis C in Canada.

Finally, a Cure for Hep C
In November of 2013, I attended a symposium organized by the CLF called Hepatitis C: From Beginning to Cure. One of the guest speakers Jordan Feld, MD, MPH, Assistant Professor of Medicine at the Toronto Western Hospital Liver Clinic, lectured on the latest advances in HCV treatment. He said that a 12-week interferon-free drug with little or no side effects and a 95 to 100 percent cure rate was in development. In contrast, the interferon-based treatments can take close to a year to complete and have many side effects. He aptly nicknamed the drug Perfectovir. After Dr. Feld’s speech, I told him I would be running in the Scotiabank Toronto Waterfront Marathon to help raise money for the CLF and to increase donors for the Trillium Gift of Life Network, a nonprofit government agency in Ontario that helps with organ and tissue donation. I asked him to join my team: Team Perfectovir! Dr. Feld happily agreed. In the meantime, hep C continued to attack my new liver.

I’m Cured!
In February 2014, my post-transplant doctor informed me of two new drugs that were approved by Health Canada. Sofosbuvir (Sovaldi) and simeprevir (Olysio) were curing hepatitis C at rates as high as 90 percent. This was great news. However, both drugs are expensive, costing roughly $86,000 (Canadian) for a 12-week course of treatment. Ontario’s provincial drug plan didn’t cover them, nor did most private plans.

The Canadian Forces had looked after me for the last 30 years, particularly in the last five, and again they stepped up and agreed to pay for the treatment. I took my first two pills, one of each drug, on March 10, 2014. After just four weeks, my viral load dropped from over 6 million units to 47. I’m happy to say that I am now cured.

It’s a bittersweet feeling, though, because without the military, I wouldn’t have gotten these drugs. I know I am fortunate. Many people are dying because they don’t have access to the new treatments. This disease is curable, and the treatment should be available to everyone. No one should have to qualify for treatment, as hep C patients in Canada do. Canada’s HCV epidemic presents an unprecedented health care crisis as more Canadians reach cirrhosis, cancer and end-stage liver disease or need a liver transplant. The costs for a transplant alone are enormous. Canada needs to develop a proactive strategy to ensure access to the drugs and maybe, just maybe, save thousands of lives, not to mention billions of taxpayer dollars.

Life After Hep C
As for my future, I’m going back to school to obtain a diploma in photography and perhaps start my own business. I’ll always be an advocate for the CLF and Trillium. I’ve already registered to be an organ donor. I have only one thing left to do, and that’s run 26.2 miles, which is planned for October 19. This seems like a piece of cake compared to what I’ve gone through already. Please consider sponsoring Team Perfectovir with a donation at www.liver.ca/lance or by registering to become an organ donor at https://beadonor.ca/lance-william-gibson

What is your greatest achievement?
My military service

What is your greatest regret?
Not paying off my mortgage

What keeps you up at night?
Tomorrow

If you could change one thing about living with viral hepatitis, what would it be?
To be more self-sufficient and not dependent on others

What is the best advice you ever received?
It is better to be blessed by the few than by nobody at all!

What person in the viral hepatitis community do you most admire?
Those who struggle alone yet make the best out of each day!

What drives you to do what you do?
My family

What is your motto?
Live as if you were dying!

If you had to evacuate your house immediately, what is the one thing you would grab on the way out?
My Canadian flag

If you could be any animal, what would you be? And why?
An eagle, so I could soar high above and be free