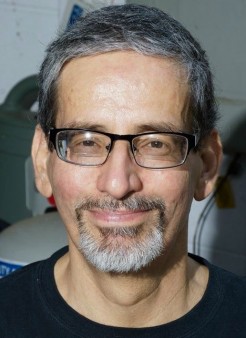 There is nothing remarkable about me or my story. I was born toward the end of the baby boom generation, on May 4, 1961. However, my story starts before that, when my mother was carrying me. She slipped on ice, and because she couldn’t stop bleeding, she was given hormones to prevent a miscarriage. She carried me to full term, but after I was born, my mom knew something wasn’t right. I had a heart murmur, and the doctors identified a ventricular septal defect, which is a hole in the wall of my heart. Now we know the hormones she took caused this.

They hoped the hole would disappear as I grew, but it didn’t. In 1972 at age 11, I had open-heart surgery to put a patch in my heart. I received several quarts of blood via transfusion during the procedure. Shortly after surgery, I developed a persistent, unexplainable low-grade fever. Eventually I went home and lived the normal life of a teen and young adult.

In 1994, I came home from work on a Friday evening and noted our kids’ wading pool had blown out of our yard. A gust of wind caught it as I was picking it up, and I wrenched my back. The next day I was in excruciating pain and went to the ER. They did many tests, including a complete blood count (CBC) and liver panel. They determined I had pulled a muscle, gave me muscle relaxers and sent me on my way. The following Monday, my general practitioner (GP) called and asked me to come in to discuss my blood tests. At the appointment, he looked me in the eye and said, “Jim, I’m looking at your results and some of your liver numbers are off. I am recommending you go to a gastroenterologist to figure out what is going on.” I had six young children and a wife who needed me; ignoring his advice was not an option.

I got an appointment with the GI quickly who ordered more lab tests, and I received the news that I had hepatitis C. I had no idea what that meant. Soon after, I began a 48-week protocol of interferon injections, three times a week. At the end of treatment, I was declared in remission. I was also told that I had the initial signs of cirrhosis. “Cured” was not a word that was mentioned or associated with sufferers of hepatitis C.

One thing I learned from my treatment and visits with this doctor was shame. I was grilled endlessly about my lifestyle. In trying to determine how I contracted the disease, he seemed fixated on the notion it was from intravenous drug use. Despite the fact that I had received a blood transfusion, he never accepted that as the reason. I felt ashamed of being a carrier and hid my diagnosis from everyone but my wife. No family, friends or colleagues knew. Since then, circumstances have forced me to reveal my illness. While I am more open about my disease, I am still apprehensive about disclosing it.

At each annual physical, things remained normal. Beginning in 2005, a new GP mentioned my liver enzymes were a little high, but said that was nothing to be worried about. This went on for years, and foolishly, I never pressed him about it. In 2009, my blood pressure was high, I was putting on weight, and my heart murmur had reappeared. My doctor thought that my patch was failing. My spleen was enlarged, which he attributed to heart issues. I didn’t question it, because he’s the doctor, right? Eventually, he referred me to a cardiologist in late 2010, who determined that the heart murmur was caused by blood flowing around the scar tissue from the surgery. The patch was fine and I began taking medication for my high blood pressure.

By March of 2012, I was struggling. My skin itched constantly and I scratched it raw in several places. I couldn’t complete sentences, finding it impossible to finish a thought. I lost things easily. I couldn’t remember the simplest of tasks. My speech began to slur. My equilibrium was off and I walked with short, stumbling steps. My wife knew something was terribly wrong and convinced me to go to the ER. I was whisked away in an ambulance to the nearest large hospital. My cirrhosis had progressed unchecked to the point where I was at stage 4, with extremely high blood ammonia levels. My liver was failing.

I was given medication and referred to the hepatology team at Indiana University Health Hospital for liver transplantation evaluation. Two other things came out of my trip to the hospital. First, I vowed to learn as much as I could about my disease. Second, I fired my GP. The man had almost cost me my life. To this day, I struggle to forgive his inaction.

I was assigned to Dr. Hwan Yoo, a jovial man with a wry sense of humor. I was holding my own despite a high MELD score (a measurement of the degree of liver damage). Dr. Yoo left for other pursuits, and I began seeing Dr. Samer Gawrieh. My first visit with him changed the course of my treatment and my life. The first words out of his mouth were beautiful to hear: “My job is to heal you, and we’re going to decide how to make that happen.”

With his care, we began two journeys. The first was pursuing being placed on the UNOS transplant database. The second was treatment with Sovaldi and ribavirin, recently approved by the FDA. The pursuit of treatment was not a happy journey. My insurance repeatedly denied treatment. The reasons were always different, sometimes baffling and at times amusing:

The other journey was pursuing a transplant. After undergoing all of the scrutiny required for transplantation, I was cleared by the team at IU and recommended for placement on the transplant list. On June 2, 2015, I received the news from Dr. Lacerda that I had been officially placed on the United Network for Organ Sharing transplant list.

On June 11, 2015, at 10:30 p.m., our phone rang. The ID said private caller, and I don’t usually answer numbers I don’t recognize. For some reason I grabbed the phone and answered. It was The Call. “We need you to come down as quickly as you can. We have a match, and you are the backup in case there are issues with the primary recipient.” After bumbling our way to Indianapolis, we arrived at 12:45 a.m. We were told to skip registration and go straight to the transplant surgery unit. I had moved into the No. 1 slot. My children arrived from their various college campuses, and after saying goodbye to my loved ones, I was wheeled into surgery. Things went very smoothly, and that morning I awoke, tired and sore. I was a new person. I immediately noticed the mental fog was gone.

Over the next couple of months, I continued to heal. I felt better than I had in 30 years. I returned to work on January 4, completing my journey back to a normal life.

I reapplied for treatment, and was approved for Harvoni and ribavirin. I started on January 9. I am looking forward to the day when I hear the words, “You are cured.” Through the grace of God I have come through to this point, and through His blessings, I will reach that goal. Hallelujah.

My advice? Be your own champion. You’re worth it!

It depends on whom you ask. Friends will say I am quiet, conservative and loyal. My family will say I’m trusting, thoughtful and family-focused. Me? Irreverent, opinionated and life-loving.

Not being more forceful or aware of my medical condition; allowing my doctor to put me in jeopardy of widowing my wife and causing my children to grow up without their father.

My mind. Since my transplant, I can’t shut it off sometimes. It’s not something I regret, though. It is wonderful to be able to feel fully functional once again.

There are actually two. First. I would mandate that the newest and best direct-acting antivirals be made available to anyone in need. Second. I would have everyone get tested for hep C at least once.

Something that Lt. Dan said in Forrest Gump: “Try to keep your feet dry when we’re out humpin’. I want you boys to remember to change your socks wherever we stop. The Mekong will eat a grunt’s feet right off his legs.”

Samer Gawrieh, a hepatologist who treated me and told me his job was to get me healthy. And you know what? He did! Thank you, Dr. Gawrieh!

To make a difference in at least one person’s life. Each of us is precious in the eyes of God. We need to honor that.

I have more than one motto:

Probably my late father-in-law’s 1947 20-gauge semiautomatic shotgun. It has huge sentimental value to me. I loved that man and miss him every day.

I have always had an affinity with horses. A horse is an animal that will die for you. It has speed, power and grace. Its needs are simple: a place to stay, a place to graze and a place to drink.