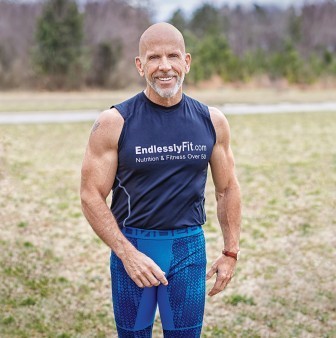 The following is an excerpt from the Hep Spring 2016 cover story:

In 2015, Gary Nash set out to become the oldest person ever to complete a course on the TV game show American Ninja Warrior. Think of hanging from your fingertips over a 10-foot drop above water, maintaining your balance while running across a spinning log, and leaping to hoist yourself over nets, walls, balls and other zany obstacles. Now, imagine doing all that at 58 years of age, with Stage IV liver damage and a revelation from your doctor six years earlier that you had only a few years left to live.

“When my doctor first told me I had hepatitis C virus (HCV) in 2007, I really didn’t understand what that meant,” says Nash, who learned of his HCV diagnosis after a routine physical with his primary care physician. “But as I went to the doctors and did a little research, I learned that hep C was going to be a game changer to my life plan for sure.”

Nash—a former national sit-down arm wrestling champion, sports lover and overall fitness nut—estimates that at the time of his hep C diagnosis, he had been living with the virus for at least 35 years. Through the decades, the virus took a major toll on his liver, causing scarring. His cirrhosis was so severe that his specialists told him he needed to start HCV treatment right away. Only after he rid the virus from his system would he be eligible for a liver transplant.

In 2008, Nash started his first of two hep C treatments to beat the disease. “Interferon and ribavirin just about killed me,” he says, recalling the dizzying array of side effects he endured on the drugs. For one of the first times in his life, he had to stop working out. At the end of his therapy, Nash received devastating news: He wasn’t cured of hep C. His doctors gave him three to seven years to live.

Soon after, Nash made the decision to shut down the construction company he’d managed for the last 21 years and move to Richmond, Virginia, for a simpler, healthier life. But after a few months of rest, Nash realized that he wasn’t ready to give up to hep C without a fight.

“I thought, This is crazy. I cannot sit around and wait to die,” Nash recalls. “So I started doing a bunch of reading about what you can do to prolong the life of your liver.”

Then, in 2014, Nash got a call from his doctors at Johns Hopkins Medical Center in Baltimore: There was a new cure on the market for HCV genotype 1, a combination of Sovaldi (sofosbuvir) and Olysio (simeprevir). They wanted him to go on it immediately. Just six weeks into the treatment regimen, blood tests showed there were no traces of the virus left in Nash’s system.

“It almost had no side effects. I was a little fatigued, but I could still make it through my workouts,” Nash recalls. Right around this time, Nash saw an ad on TV about tryouts for American Ninja Warrior. The athlete saw it as the perfect opportunity: He was going to set out to conquer one of the world’s toughest obstacle courses, all while raising awareness and hope around hep C on a national stage.