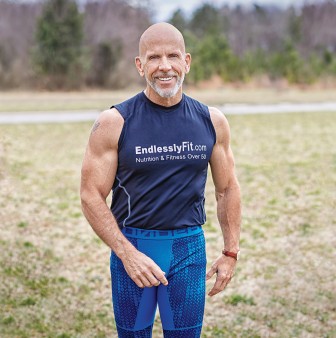 In 2015, Gary Nash set out to become the oldest person ever to complete a course on the TV game show American Ninja Warrior. Think of hanging from your fingertips over a 10-foot drop above water, maintaining your balance while running across a spinning log, and leaping to hoist yourself over nets, walls, balls and other zany obstacles. Now, imagine doing all that at 58 years of age, with Stage IV liver damage and a revelation from your doctor six years earlier that you had only a few years left to live.

“When my doctor first told me I had hepatitis C virus [HCV] in 2007, I really didn’t understand what that meant,” says Nash, who learned of his HCV diagnosis after a routine physical with his primary care physician. “But as I went to the doctors and did a little research, I learned that hep C was going to be a game changer to my life plan for sure.”

Nash—a former national sit-down arm wrestling champion, sports lover and overall fitness nut—estimates that at the time of his hep C diagnosis, he had been living with the virus for at least 35 years. Through the decades, the virus took a major toll on his liver, causing scarring. His cirrhosis was so severe that his specialists told him he needed to start HCV treatment right away. Only after he rid the virus from his system would he be eligible for a liver transplant.

In 2008, Nash started his first of two hep C treatments to beat the disease. “Interferon and ribavirin just about killed me,” he says, recalling the dizzying array of side effects he endured on the drugs. For one of the first times in his life, he had to stop working out. At the end of his therapy, Nash received devastating news: He wasn’t cured of hep C. His doctors gave him three to seven years to live.

Soon after, Nash made the decision to shut down the construction company he’d managed for the last 21 years and move to Richmond, Virginia, for a simpler, healthier life. But after a few months of rest, Nash realized that he wasn’t ready to give up to hep C without a fight.

“I thought, This is crazy. I cannot sit around and wait to die,” Nash recalls. “So I started doing a bunch of reading about what you can do to prolong the life of your liver.”

Then, in 2014, Nash got a call from his doctors at Johns Hopkins Medical Center in Baltimore: There was a new cure on the market for HCV genotype 1, a combination of Sovaldi (sofosbuvir) and Olysio (simeprevir). They wanted him to go on it immediately. Just six weeks into the treatment regimen, blood tests showed there were no traces of the virus left in Nash’s system.

“It almost had no side effects. I was a little fatigued, but I could still make it through my workouts,” Nash recalls. Right around this time, Nash saw an ad on TV about tryouts for American Ninja Warrior. The athlete saw it as the perfect opportunity: He was going to set out to conquer one of the world’s toughest obstacle courses, all while raising awareness and hope around hep C on a national stage.

“When I saw that ad, I thought, You know what? I still think I have one more thing in me,” says Nash, who notes that even though he’s now out of the hep C woods, he still has extensive liver damage and may still need a transplant in a few years. In the meantime, Nash wants to test his newfound strength and his new liver-friendly diet plan, hoping to hold on to his health.

To begin his training for the show, Nash worked out almost every day with HIT, or high-intensity training, an exercise plan designed by the military to help soldiers get into peak physical shape as quickly as possible. The regimen involves fast bursts of activity—like push-ups, crunches, sprints and pull-ups—followed by brief recovery periods. Doing so helps get the body used to building strength efficiently and doling out the quick, concentrated bursts of energy Nash would need to compete. Nash also built his own obstacles all around his home and regularly attends a special American Ninja Warrior gym in nearby Baltimore to test out his abilities.

“You have to train every muscle group and be prepared for just about anything,” Nash says. The athlete then combined this intensive workout regimen with a diet plan focused on delivering the maximum amount of nutrition per bite, with a careful focus on foods that are liver-friendly and anti-inflammatory.

“I don’t drink anything but water. Then, I eat things like oatmeal in the morning, veggies and proteins in the afternoon and something light, like a protein shake at night,” says Nash. The key is to combine complex, fiber-rich carbs with healthy fats and anti-inflammatory foods that are high in potassium and low in sugar, according to the athlete.

Go-to staples for Nash include dried apricots, vegetable juice, roasted almonds, fish, broccoli, shiitake mushrooms and tomatoes. For an in-depth look at Nash’s exercise and diet regimen, check out his book, Endlessly Fit: Nutrition & Fitness For Those Over 50, which Nash self-published in 2015 to help baby boomers and HCV survivors like him get their bodies back on track.

In 2015, Nash finally got the big opportunity to compete on American Ninja Warrior during regional tryouts in Orlando.

“Unfortunately, I fell on the second obstacle and didn’t make the show,” Nash recalls. It was the spinning log, and the athlete lost his footing and plunged into the water below him. But just as with his first hep C treatment, Nash isn’t going to let one failure discourage him from achieving his dreams.

“I’m hoping to redeem myself this year,” says Nash, who recently submitted his second audition video to American Ninja Warrior. Now, at 59 years old, Nash is once again hoping to become the oldest competitor to finish the obstacle course—this time, with a bit more experience.

“I added some jujitsu, wrestling and work on the trampoline to connect the different muscle groups and work on my balance,” Nash says. Because of his cirrhosis and advanced age, he says this year might be the last he is physically able to compete.

Regardless of how the competition turns out, Nash wants to bring HCV awareness and perseverance to the American Ninja Warrior competition. “For those who don’t know, I want to promote the fact that there is a cure for hepatitis C. I also want to promote the fact that [anyone living with hepatitis C] can do this, too. And if you don’t believe it, look at me!”