The U.S. Food and Drug Administration (FDA) has approved Merck’s once-daily fixed-dose combination tablet Zepatier (grazoprevir/elbasvir), with or without ribavirin, to treat those with genotypes 1 and 4 of hepatitis C virus (HCV).

The recommended treatment lengths for Zepatier are 12 or 16 weeks, depending on hep C genotype, treatment history, and for those with genotype 1a, the presence of NS5A polymorphisms, which are certain genetic differences in their virus. According to Merck, the vast majority of individuals eligible for Zepatier treatment would take it for 12 weeks. 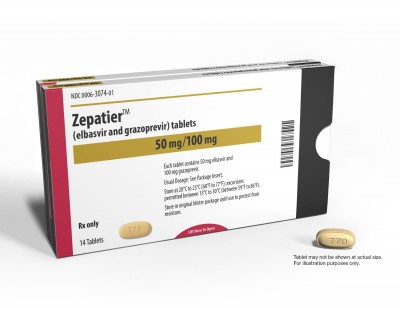 Merck has set the price of 12 weeks of Zepatier at $54,600, which is considerably lower than the prices for other hep C treatments, notably from Gilead Sciences and AbbVie.

About 1 percent of the participants in clinical trials of the drug experienced elevations of liver enzymes greater than five times the upper limit of normal. Therefore, the FDA advises that those starting treatment with the tablet should undergo liver enzyme tests before and at intervals throughout treatment.

Zepatier should not be given to those with moderate or severe liver impairment (Child Pugh B or C). It should not be combined with the HIV antiretrovirals Reyataz (atazanavir), Prezista (darunavir), Kaletra (lopinavir), Invirase (saquinavir), Aptivus (tipranavir), or Sustiva (efavirenz). Combination tablets with those medications include Evotaz (atazanavir/cobicistat), Prezcobix (darunavir/cobicistat), and Atripla (efavirenz/tenofovir/emtricitabine).

To read the FDA press release on the approval, click here.

To read the Merck press release on the approval, click here.