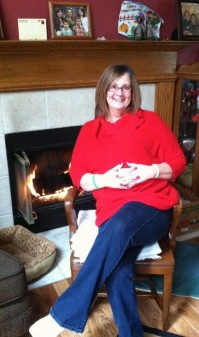 My story begins when I was a child. I made good grades and excelled in my studies. I loved sports and participated in softball, track, basketball and the swim team. I wanted to travel and go places with my life.

However, I was sidetracked by boys. In my senior year of high school, I fell in love with the man I would marry. I became pregnant right away and learned that I had type O negative blood; my husband had type O positive. It was 1974, and after the birth of my child, I was given a RhoGAM shot, which is made of human plasma. In 1977, I gave birth to my daughter, and again I received RhoGAM. In

1980, I divorced my husband and remarried. Two years later I gave birth to another daughter, again receiving a RhoGAM shot. The following year I gave birth to my youngest daughter. She was born prematurely, and I needed an emergency cesarean section, a unit of blood and more RhoGAM.

I mention all of this because there are five possible ways I could have gotten the hepatitis C virus: a blood transfusion and four RhoGAM shots.

In 1987, while raising four children and working full time, I returned to college full time. In 1990, I divorced a second time. I continued to work, attend school and raise the children on my own. However, I began having health problems. I was tired and my energy bottomed, out so I sought medical advice.

Eventually a blood test showed that I had non-A, non-B hepatitis. I was told there was nothing to worry about, as it didn’t seem to do anything. I continued with my life, graduated college and took a job in Ohio. I was finally moving up the career ladder and enjoying some of the perks that came with a decent job. However, in 1996, while flying home from a business trip, I read in USA Today that anyone who had received blood or blood products before 1990 should be tested for this new virus called hepatitis C (HCV).

As soon as I landed in Columbus, I called my doctor and requested the test. Two blood tests later, it was confirmed: I had hep C. In the meantime, I had met someone and was engaged to be married again; the HCV diagnosis ended the engagement. In 1996, I began my first round of treatment. During that same period, I lost my mother and had my first granddaughter, so many things were going on in my life. I took a leave of absence from my job in order to do the treatment. I had genotype 1a, and the first round of treatment was interferon only.

I began to read everything I could find on HCV. Eventually I found a group of people on Internet chat rooms. We began comparing symptoms and sharing information from different doctors around the country. I also started an HCV support group here in Columbus, Ohio, and was a contact resource for a national liver association.

I responded to HCV treatment, but I relapsed in the six-month period after treatment was over. I tried to return to work but was laid off in 1998. A couple of jobs and moves later, my doctor prescribed treatment again, this time with ribavirin and interferon. However, I had some medical problems, including low platelets, so the interferon dose was reduced. Despite this dose reduction, my liver enzymes returned to normal and my viral count dropped.

Eventually I was referred to the transplant clinic and began a new journey. I was added to the transplant list in October 2007. On December 5, I received a call about a possible liver. We went to the hospital, but the liver was not viable. I got a second call a few days later, and this time we called the prayer line. It was the real McCoy, and I had my transplant the next morning. It went well, and I was home before Christmas. It was a wonderful holiday.

In late January, I was struck with severe abdominal pain while I was getting up from the couch. I called the transplant center, and they said the pain was normal. However, in February, my lab tests were abnormal, and I was admitted to the hospital. They found a blood clot in my hepatic artery, which was preventing blood from flowing to the liver. I was hospitalized for about six weeks with a drainage bag attached to me that collected bile. I was relisted for transplant that June.

I was not optimistic about my chances of receiving another transplant. Many of my friends in my support group didn’t get the chance for one liver, let alone two. From March to September 2008, I was in and out of the hospital and underwent over 20 procedures. On September 16, I was admitted to the hospital in final stages of liver failure. On September 25, they told my family to come to the hospital as there were still no livers available and my time was running out.

We began a prayer vigil. Later that night, the nurse returned to the room to say that my doctor was working on getting a liver. On September 26, I received my second liver transplant. Three days later I was taken to surgery again because of a blood clot in the portal vein, which they had to expand using donor tissue.

I have had my share of problems, but overall I am doing as well as can be expected. I was put on warfarin (a medication that prevents blood clot formation) and had to have seven pints of blood because of a nosebleed that wouldn’t stop. In the spring, I showed signs of rejection, so I had to take steroids for a year, causing me to gain a great deal of weight. However, my recent ultrasound looks good.

Nutrition played a big role in my still being here today. During my liver failure, I became a vegetarian, as my liver couldn’t process animal-based protein and I had hepatic encephalopathy. I ate plant-based protein, organic food, and more fresh fruits and veggies. I am now six years post-transplant, and I am working every day to improve my health. I have lost more than 40 pounds of the weight I gained from steroids.

On May 2, just before I turned 59, I started a 24-week treatment program with Sovaldi and Olysio. As of now, I am virus-free and doing well. I am on my way to the best health I have had in years!