Elizabeth Owens was frightened when she learned she had hepatitis C, but advocacy and education are building up her courage. 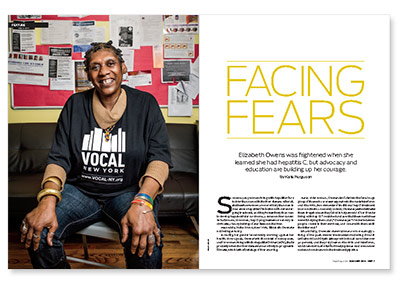 Some may say women living with hepatitis C are luckier than men with the liver disease. After all, studies show women are more likely than men to clear severe hepatitis C infection without undergoing treatment, and they’re less likely than men to develop hepatocellular carcinoma, a common liver cancer. What’s more, in women, hep C progresses more slowly to cirrhosis, a heavy buildup of scar tissue on the liver.

Meanwhile, in the Bronx, New York, Elizabeth Owens is not feeling so lucky.
In reality, her gender is currently working against her health. Now age 54, Owens is in the midst of menopause, and for women living with the hepatitis C virus (HCV), that’s precisely when the liver disease is more likely to progress to fibrosis, which is the first stage of liver scarring.

As an older woman, Owens also falls into the female age group of those who are less responsive to the meds interferon and ribavirin, two elements of traditional hep C treatment (more on this in a moment). Indeed, Owens says she distrusts these drugs because they failed to help several of her friends living with hep C. “I watched and saw that these medicines weren’t helping them at all,” Owens says. “I’ve buried seven people. I went to their services, and I was with them until the bitter end.”

Thankfully, Owens’s observations are increasingly a thing of the past. Newer treatments—including Sovaldi (sofosbuvir) and Olysio (simeprevir)—boast cure rates over 90 percent, and they rely less on ribavirin and interferon, which is notorious for its flu-like symptoms. And even newer meds and combos are in the treatment pipeline.

This is good news for the nearly 3.2 million people who, according to the Centers for Disease and Control Prevention, are chronically infected with HCV in the United States. Hepatitis C is a liver disease that is transmitted when the virus of an infected person enters the bloodstream of a negative person. This happens most commonly through injection drug use, needlesticks, tattoos, piercings and childbirth, as well as blood transfusions and organ transplants before 1992, when sensitive screening tests for hep C were developed. In rare cases, it can also be transmitted sexually.

Owens is candid about how she contracted hep C. She used heroin for years. “I kept hearing about hepatitis C, because I had a lot of friends who passed away from the condition,” she says. But like many people with undiagnosed HCV, she didn’t notice any unusual symptoms so didn’t get tested.

“At the time, I was still doing drugs and I was running around all over the place,” she recalls. “I’m a workaholic, so if I noticed that I was getting tired, I’d tell myself to rest for a couple of days. Then I’d get back up and start going again.”

Still, doubts and curiosity nagged at her. While at a drug treatment center that offered physicals and medical checkups, she decided to ask the doctors to test her for the disease. The results were positive.

The diagnosis devastated Owens. She was especially frightened because she didn’t know anything about the disease. So she asked questions of people she knew were suffering from the illness and on treatment. Their stories fueled her fear of treatment even more.

“As far as treatment was concerned, I noticed there were no dependable doctors that you could go to for treatment for anything,” Owens says. “In my neighborhood, I didn’t think any of those health professionals was reliable enough to be my doctor. They couldn’t answer my questions about the disease and how it affected African Americans like they could for [people of] other races.”

So Owens faked left to go right. Instead of seeking treatment for hep C, she signed up to kick her heroin habit at the drug treatment center she’d been visiting. Since she wasn’t comfortable with the hep C expertise in her community, she preferred to address the destabilizing effects of drugs.

When Owens stopped using heroin, her life changed. She became a volunteer at the New York Harm Reduction Educators (NYHRE), a grassroots, social justice advocacy organization in New York City that works with people who use drugs or live in other desperate circumstances.

Owens was familiar with NYHRE. It’s where she got clean syringes back in her drug days. This time around, the nonprofit agency provided her a more constructive purpose. She learned how to communicate and reach out to other people.

The majority of people Owens interacted with were black and Latino. “I got tired of seeing them walking around with scabs, or spots, on their limbs,” she recalls. “I cared about their health and talked to them so they’d know there were places to get care.”

Soon, Owens found herself doing outreach work and dispensing health information along with syringes. She found a lot of love in the work. “I hug people,” she says. “I’m the type to hug you and let you know that we’re here together and we’re going to beat this thing.” This type of work, she says, “teaches you not to judge somebody for what they are.”

One day, a group from VOCAL-NY arrived at NYHRE to talk about advocacy. Owens listened to them discuss how politics works and how to use the political system to improve people’s lives in their communities. “I got so interested in it because I noticed that they didn’t discriminate against a drug user and they told us that advocacy could work,” she says. “All of a sudden, I found myself being involved and bringing my energy to VOCAL-NY.” 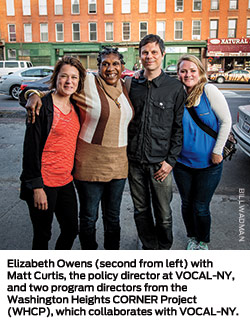 Based in Brooklyn, VOCAL-NY (Voices of Community Activists and Leaders) is a grassroots group dedicated to helping low-income people battle issues such as HIV, incarceration, poverty and hepatitis. As Owens immersed herself in trainings about HCV, she realized how little she actually knew about the disease. It also dawned on her that with certain diseases, such as HIV, delaying treatment may in fact be harmful.

This disconnect, Owens says, was the main reason she became a peer educator. “I started learning more about how to stay healthy, how to pass out information to others who were drug users so I could help stop the spread of hepatitis C and HIV.”

Currently, Owens chooses not to begin hep C treatment. Her reasons are simple: Doctors scare her and she lacks confidence in the health care system. “I want to find a responsible doctor that I can start treatment with and go all the way to the end,” she says. “When I go to a doctor, I have to build trust. I want to feel comfortable because I’m putting my life in that person’s hands. I don’t want someone talking to me like they’re trying to discipline me, telling me to do this and do that [without explaining things].”

Owens isn’t the only one who’s afraid. A support group she formed is peopled by other women living with hep C who share her fear of doctors and the medical establishment. But many people with hepatitis C, for one reason or another, delay going into treatment. Some may never develop a major complication from the illness; others aren’t faced with life-threatening liver disease; and yet others are holding out for better treatments.

Fortunately for Owens, her health is currently good. But most experts agree that if hep C remains untreated, the condition is more likely to develop into liver cancer.

As an organizer at VOCAL-NY’s GROW (Grassroots Organizing to Win), Owens advocates on behalf of people who often don’t feel they have a voice. “I like to say I give people back their life and I let them know that they do have a right to say something,” she says. “My payment is when somebody comes up and hugs me and says, ‘Yo, I didn’t know that I could go up there and sit in a congressman’s office or an assemblyman’s office and they’d listen to me tell them what’s going on in the neighborhood.’”

During the two and a half years she’s been at VOCAL-NY, Owens underwent a personal transformation that is ongoing. “What I did is rebuild my whole system of living,” she says. “I had to get someplace safe to live, have a foundation so I could pay my rent, be able to cook and just be relaxed. And then I changed my diet.”

Previously, Owens would eat just once a day and quaff 40 ounces of beer. Now she cooks her own meals in lieu of buying store-bought prepared foods. “I even make my own jellies and chicken and dumplings and gumbo, all that stuff,” she says. Fresh fruit is also on the menu nowadays, and she drinks water and juices. “If I do have a drink, everything has to be light,” she says. (But, experts warn that even small amounts of alcohol can accelerate the onset of liver disease.)

At home, Owens gets emotional nourishment from her female friendship group. When they get together for a night or for the weekend or for a “women’s day,” no cell phones are allowed. “It’s called a ‘strength party,’” she explains. “That’s where we build each other up and everything is strictly confidential and we all get in the kitchen and cook something.”

But for Owens and company, these strength parties offer much needed support in other areas of their lives. As a former drug user now living with hep C, she’s often exposed to the sting of stigma, she says, from a source many may find surprising. “Once doctors find out that you’re an ex-drug user, they don’t want to give you any information,” Owens complains. “Many of them just think you want to get something so you can go get high with it, especially if you’re an African-American woman.”

In her South Bronx neighborhood, Owens says, doctors are hard to find, so she’s ventured to “different places to help me with my health.”

As an activist and organizer, Owens is boldly outspoken. The same holds true in her personal life; she doesn’t hesitate to ask medical practitioners questions about hep C and her health. “When I go to the doctor with my book of notes to ask some questions,” she says, “I feel like the nurse or doctor should be equipped to reply back to me, not say, ‘Well, we’ll find out the next time you visit.’”

Experiences like this have kept Owens from starting hep C meds. But as she negotiates her ambivalence about doctors, she’s slowly preparing herself to enter treatment. “Now, I’m getting more courage,” she says. “Me and the women I meet with on the weekends, we’re going to try the buddy system to help me shop for a woman doctor to visit.”

And so Owens’s transformation continues. She has taken control of her health and is moving in a more positive direction. Along the way, she’s helping others by advocating for their health. Adds Owens in her characteristic big, booming voice: “Because of stigma, the doors have always been closed in my face by the system. But I’m making a difference now.”