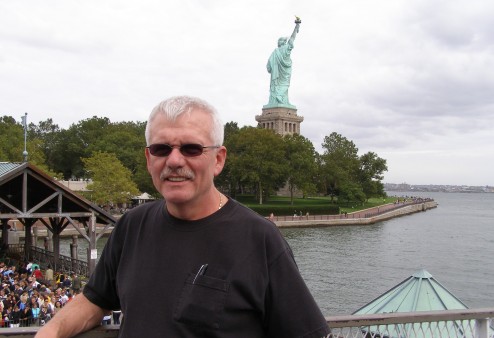 I was diagnosed with hepatitis C (HCV) after at least three years of nausea, extreme fatigue, and feeling generally sick most of the time. A couple of years before I was diagnosed, I went to the emergency room for extreme abdominal pain. I spent three days in the hospital undergoing a battery of tests, but not a single test was for hep C. After I was released from the hospital, I had more tests, including a colonoscopy, endoscopy, etc. The attending surgeon said I should have a hernia repaired (he also wanted to take out my gall bladder).

The following year during the screening for surgery, they found that my ferritin levels were extremely high. This was an indicator that my liver was not handling iron, and meant that it was not functioning well. After surgery, I needed more blood work, revealed that I had high liver enzymes (AST and ALT). This lead to an HCV antibody test, which came back positive. Since an antibody test alone does not indicate HCV, I had an HCV viral load test. It showed that I had chronic HCV infection.

I was devastated by this news. I was sure that I would die a dreadful death. After spending some time with a good psychologist who helped me deal with the anxiety I felt, I immersed myself in learning as much as I could about HCV.

Eventually I joined a support group in a nearby community. I also joined an online peer support group consisting of other people who had HCV, many of whom had been treated. Not all of them had successful outcomes, but some had an SVR (sustained virologic response). Some were cirrhotic. People of all genotypes were in the group. I had genotype 1a.

Being in a peer support group helped me immensely. As I learned more, I realized that my diagnosis was not a death sentence. There was a chance that I could be cured, but that word was not used then, as it is now.

My biopsy revealed very little liver damage with a stage 0-1 finding. This was very good news indeed, and I clung to every slice of positive news I could find or learn.

My hepatologist (liver specialist) is involved in research, and being referred to him was a stroke of good luck for me. He was starting a clinical trial, testing an experimental drug regimen, and suggested that I participate. It was a Phase 2 trial, and not many people were participating worldwide. I agreed to be part of the study. It was not just for my own personal reasons that I chose to participate. I believed that I was helping to advance research, so there would be better outcomes for people. I am not lying when I say that I was looking for the best possible outcome for myself. If I had tried the standard of care (SOC) at the time, which was pegylated interferon and ribavirin, I would have only had a 30% to 40% chance of an SVR.

I did well in the extensive screening tests and was accepted in to the study. I had mixed emotions, as anyone would in those circumstances. Those soon faded away as I prepared to start treatment. Eight months after diagnosis I started treatment with pegylated interferon, ribavirin, and a third experimental drug, mericitabine.  (Note: Mericitabine has not been brought to market.)

The first month was a hell like I had never experienced in my life! I lost 14 pounds in the first nine days of treatment. In the second and third month, I dropped to a very deep and dark place in my mind where I had never been before. I was an emotional wreck but determined not to use antidepressant medication. Three months into treatment, however, I requested an antidepressant, which eventually helped me with my moods. After six months of treatment, things kind of leveled off for me. I did 48 weeks in treatment. I cleared the virus at week five of treatment and stayed that way, which means that I am undetectable and cured of HCV!

While I was on treatment, I began to get involved in small ways to spread the word about HCV, and to raise awareness about this dreadful disease. Since the completion of my treatment, I have become even more involved in advocacy. I participate in support groups, trying to help others that were like me: scared about being diagnosed and about treatment.

If it had not been for the people in the groups that I joined, I honestly don’t know how I could have gotten through the whole ordeal from the beginning to now. There are so many wonderful people in the HCV community, and I have been fortunate to meet some of them in real life. I am a big believer in hope. I think that hope is the most important thing we need when facing a serious disease such as hep C. Even when it seems like there is no hope, there is!

Never give up or give in. Keep hope in your heart.

What three adjectives best describe you?
Persistent, consistent, and dedicated to effecting change for people living with hep C.

What is your greatest achievement?
Helping raise awareness about hep C and helping to save lives that may have otherwise been lost due to fear and lack of understanding and knowledge. Even now, after so many years (too many), hep C is widely misunderstood.

What is your greatest regret?
I have none.

What keeps you up at night?
I generally have no issues with sleep. As far as worry or concern, I am concerned greatly about access to care and treatment. Too many people with hep C are not getting the care they need.

If you could change one thing about living with viral hepatitis, what would it be?
I’d see that there was a cure and vaccine available to all.

What is the best advice you ever received?
Live in the now. Do not worry about what was or what might be.

What drives you to do what you do?
Once I was over the initial shock of my hep C diagnosis, I made a promise to myself to do whatever I could to make things better for others.

What is your motto?
The Golden Rule: Do unto others as you would have them do unto you.

If you had to evacuate your house immediately, what is the one thing you would grab on the way out?
My dog Jess

If you could be any animal, what would you be? And why?
A dog. I am a dog lover, can you tell? Without the support from my dog during the very hard days in my treatment, I don’t know how I would have made it through the darkest hours. There is pure love between me and my dog.