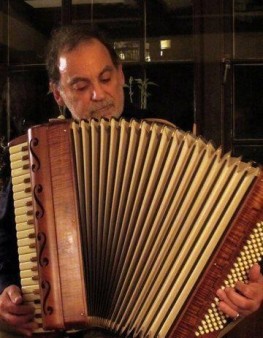 In 1994, I was in pretty rough shape and getting worse and nobody knew why. I was under a lot of stress just finishing a PhD, writing a book, going through a divorce, alternating between smoking a pack a day and drinking quite a bit, and going to the gym to try to work it off. But that didn’t explain why all of a sudden I started getting lost in the city I grew up in; or why all of a sudden I would get very pale and woozy and lose my balance, or why sometimes I just felt like curling up in a ball on the sidewalk and going to sleep.

What made it worse was that when I told my doctor this, she thought I was under too much stress and that maybe I should take a Valium. Of course I was under a lot of stress, but not any more than what I’d been under for quite some time, and being the neurotic East Coast Jewish intellectual type, I thrived on stress! Well that, bagels, and a good smoked meat sandwich on rye with real crunchy pickles and some chopped liver on the side!

I insisted that I didn’t need any drugs; I thought that a health program would be better, and my doctor, herself having run a few marathons, agreed. So, I started cleaning up my life and swimming more and drinking and smoking less, but still I was zonking out and really getting scared.

Six months later, my doctor ran some blood tests. A few days later she called me and told me that she had some bad news for me: “You have tested positive for hepatitis C.” Boy was I ever relieved. I didn’t know what hepatitis C virus (HCV) was, but at least I knew I wasn’t crazy.

Then the tests began, and with the PhD finally finished, I earned the right to collapse and I did. I went downhill so fast that if not for some very good friends I don’t know how I would have survived. There went my savings, I was overdrawn, my lease was up, I couldn’t work, I didn’t know what to do. I was really tired, confused and I cried a lot.

I had to sell everything I owned to stay alive, and I almost wound up on the street! But, as luck would have it, social services in my municipality stepped in to help. I got a social worker who helped coordinate all my appointments and my application for disability (that took about three years, and is a whole other story).

Having been in the university environment for a long time, I began to do some research on hepatitis C, and was appalled at the lack of current information then available. I tried turning to a local liver support organization but they were not into patient empowerment and didn’t know much about HCV either.

Luckily, I had a computer and internet access and I found the HEPV-L list. As soon as I began to read the stories of other people with hep C, I heard my own inner words that I was using trying to explain my situation to others, as I tried to explain how I felt about these strange symptoms I was having.

The long and the short of it is that I got so sick that I couldn’t do much of anything at all except sit on the park bench with people 30 years older than me. What a life! Eventually, I did get my disability pension and some friends encouraged me to move to the west coast of Canada where the weather was friendlier than in Montreal, where I lived. I was broke, so my friends who had moved to Vancouver Island (God bless them) paid for the move, took me in and helped coordinate everything for me. I was on a full disability; I couldn’t walk much, spent most of my time zonked out, I couldn’t read and I couldn’t drive.

Between 1997 and 2003, I was able to get on treatment three times. The first time with just regular standard interferon, three times a week, I had viral breakthrough so they pulled me off. The second time I got into a clinical trial for genotype 1 patients. I went on standard interferon and ribavirin for 48 weeks. I was a non-responder. Finally, I was enrolled in a clinical trial of peginterferon and ribavirin for 48 weeks, and for the first time since I was diagnosed my liver enzymes became normal. But I did not clear the virus.

However, since the last round of treatment, I have been able to walk, and sometimes swim; I can also drive a car again and I can read and actually remember what I’m reading. It hasn’t been all at once, but it has definitely been the result of treatment. In fact I have regained enough health to come off complete disability and go back to work; this has helped me greatly, giving my life purpose and direction as well as helping me fight the depression that being chronically ill causes. I still feel lousy a lot of the time; but being able to work at something I like helps me ignore it.

Being asked by Alan Franciscus to join the team at the HCV Advocate was one of the most amazing events in my life. Looking back, now, after having been with the Hepatitis C Support Project for many years, I don’t think I would have kept my sanity or survived my experience with hep C had I not joined the team. Working at the HCV Advocate is not really a “job.” It’s more like being involved in a community of support and vision. And, I needed and still need that support and vision to keep going.

It took a long time for me to clear the drugs from my system. I do NOT like treatment. It made me a wreck. I did take antidepressants to help (and believe me they helped); but to quote me on this: “This stuff (interferon) makes you crazy!”

In 2013, I’d been plugging along, coping with the aches, pains, brain fog, and getting really scared that any day I was going to collapse from a bleed, while most of my friends with hep C were getting cured. Thank God for friends! They just kept bugging me. “Hey, I’m cured! Why don’t you go on a clinical trial? It worked for me! And NO SIDE EFFECTS” (or some version thereof).

So, I asked my GP to refer me to the Percuro Clinic in Victoria, BC, and to let them know I was interested in some of the new direct-acting antiviral (DAA) trials. Percuro got back to me lickety-split and the next thing you know, I was scheduled for a Fibroscan. I was so glad I was NOT going to get another biopsy! The biopsy I had during the second clinical trial was so painful. I was up all night in terrible pain, and actually in tears some of the time. I had a hep buddy with me, who helped me through, and boy, am I glad she was there. The pain was gone the next morning, but all night it felt as if someone had kicked me really hard in the ribs.

Now for something totally different. The Fibroscan was absolutely painless, non-invasive and over before I knew it. For me, though, the “life-changer” was when my hep doc gave me the results. I couldn’t believe it. After all these years my liver damage was only between stage 1 and 2 fibrosis! I was stunned. I wasn’t about to die from liver failure. Now what? Why was I feeling so lousy? Was it the hep? Was it in my head?

I found out the answer. I was put on an interferon-free trial of two DAAs and ribavirin. The first two days I felt “strange,” and then for the next eight days, I felt better than I had felt since God only knows when!

My morning ritual of waking up to muscle and joint pain and then an hour later going into brain mush on and off all day STOPPED. It just stopped. It was so weird! I wasn’t used to not having pain and brain fog, so I knew right away that this trial was working (later confirmed by the first blood test that showed that my viral load dropped from over 10 million copies to 467 copies in 7 days, and to 80 copies 5 days later).

Then I went into afib. Afib is short for atrial fibrillation, which is a kind of short-circuiting of the heart wiring. My heart speeded up, but not evenly; sort of like a lame camel running for its life. Really uneven, and this unevenness affected the distribution of oxygen to my brain and body, lowering it by about 30 percent! So, while my heart was beating fast enough to run a marathon (nonstop for over 48 hours) I was also getting way less oxygen to my system, and at risk of a stroke or my heart suddenly stopping.

Now, I have had afib episodes before, but we thought it wasn’t too serious. However, because I had been previously diagnosed with this condition it was a concern at the trial clinic. But, we took the gamble and ran with it. Finally, however, the team decided that I had to come off the trial because the risk was too great.

I cried. I don’t know if it was because now I knew that I had a serious heart condition, or because I knew that, if I could have stayed on the trial for a few more weeks, I would have been cured.

I have been told by Alan Franciscus and Lucinda Porter that there will be new trials for people like me who are genotype 1a and interferon intolerant and who also have heart conditions. I believe them. And it gives me lots of hope. But I’m still really sad.

Throughout all of this, I haven’t had a cigarette or a drink of alcohol in many years. I eat mostly organic and lots of fresh veggies and fruit. I spend a lot of time walking in nature or playing music, and these are really good for my soul. However, I still get very tired and have to sleep a lot; I also have developed hep C-related fibromyalgia and I have some pretty achy days, and attacks of brain fog, but these seem to be less and less.

Since the beginning of my fight with hep C I have been involved in the hep C movement, and it has really helped me keep my perspective. I am really thankful for those out there who give of themselves for others, and saddened by the loss of a lot of friends to this disease.

What three adjectives best describe you?
Intense, intense and intense

What is your greatest achievement?
That’s a tough one. Getting my PhD from McGill and having it published was really important.

What is your greatest regret?
That I have been so angry

What keeps you up at night?
That I can’t make it all better

If you could change one thing about living with viral hepatitis, what would it be?  The stigma

What person in the viral hepatitis community do you most admire?
Alan Franciscus

What drives you to do what you do?
A need to understand and to heal the world, to make things better

What is your motto?
Say what you mean and mean what you say.

If you had to evacuate your house immediately, what is the one thing you would grab on the way out?
My accordions