Can You Get Away With an Even Shorter Hepatitis C Treatment?

Research suggests that some people are taking hep C therapy for longer periods than they actually need.

The current crop of direct-acting antivirals (DAAs) to treat hepatitis C virus (HCV) are considered miraculous because of their high cure rates, relatively mild side effects and much shorter treatment lengths compared with older treatments. But even 12 weeks of these medications may be overkill for certain people seeking a cure for hep C. New research suggests that many who have been treated for that long could have gotten away with eight, perhaps even six weeks.

Gilead Sciences’ Harvoni (ledipasvir/sofosbuvir) has cornered the hep C treatment market since its approval in October 2014. Harvoni, which is indicated, with or without ribavirin, for those with genotypes 1, 4, 5 and 6 of hep C and those who are coinfected with HIV, has a recommended treatment length of 12 weeks. There are two exceptions to this recommendation, both for people with genotype 1: Those who have been treated before who have compensated cirrhosis should take 24 weeks of Harvoni, and those who are being treated for the first time who don’t have cirrhosis and who have a viral load of less than 6 million can consider just eight weeks of treatment.

When Harvoni got the nod from the U.S. Food and Drug Administration (FDA), Gilead estimated that perhaps half of all people with genotype 1 could take just eight weeks of treatment. However, according to Norah Terrault, MPH, MD, a liver specialist at University of California, San Francisco, many physicians in her field, herself included, have often erred on the side of caution with their hep C patients, treating them for 12 weeks even when they met all the criteria for eight weeks of Harvoni.

“We kind of didn’t believe that eight weeks would be sufficient,” Terrault says. “So many of us were being a little more selective. If people had a profile that looked a little less than ideal, we would give them 12 weeks. I think it was physicians making decisions because they just didn’t feel enough confidence about the data [from clinical trials] that had been presented.”

Terrault is the lead author of a new study examining the real-world results of several different groups of individuals treated with Harvoni for eight or 12 weeks. In short, the results of eight weeks of treatment were superb, matching the high cure rates seen in clinical trials—in the vicinity of 95 percent. Presented at the International Conference on Viral Hepatitis 2016 in San Francisco, her analysis took a look at, for example, the Phase III TARGET study of Harvoni, finding that 192 of the 323 participants who qualified for eight weeks of treatment were actually given 12 weeks under the instruction of their physicians.

Not only does such real-world data lead Terrault to feel more confident about prescribing eight weeks of Harvoni to patients who qualify, she even theorizes that the three-point criteria for such a short treatment duration may be too restrictive. The analysis that helped devise the 6 million viral load cutoff, she points out, included so few people who failed treatment that it was hard to determine just what the right viral load threshold should be. It’s possible, she says, that a higher viral load cutoff may still yield an excellent cure rate; or perhaps there is no viral load cutoff and what really matters is just having a lower level of liver damage and being a treatment first-timer.

Meanwhile, another set of researchers has devised a mathematical model that looks at how well individuals are responding to hep C drugs and determines whether they can cut short their treatment. Publishing their findings in the Journal of Hepatology, the scientists studied 58 people with hep C undergoing 12 weeks of treatments based on Sovaldi (sofosbuvir).

The study’s lead author, Harel Dahari, PhD, an assistant professor of hepatology at Loyola Medical Center in Maywood, Illinois, says he and his colleagues are awaiting approval to begin a small trial to better test their model.

Eventually, physicians may be able to use their model as a guide to reducing treatment lengths on an off-label basis.

Two small, recent studies have also found that six weeks of Harvoni may do the trick for people acutely infected with hep C (meaning they contracted the virus within six months of starting treatment). One study, presented in February at the 2016 Conference on Retroviruses and Opportunistic Infections (CROI) in Boston, included 26 HIV-positive individuals acutely infected with HCV, 73 percent of whom had hep C genotype 1a while the rest had genotype 4. Twenty, or 77 percent of them, achieved a sustained virologic response 12 weeks after completing therapy (SVR12, considered a cure) after taking six weeks of Harvoni. Of the six people who were not cured, three experienced a viral relapse, one was reinfected with the virus and two were lost to follow-up after they had recorded an undetectable viral load four weeks after completing treatment (known as an SVR4, a strong indication that they would later achieve an SVR12). And on April 16, researchers at the 51st International Liver Congress in Barcelona reported that all 20 people acutely infected with genotype 1 of HCV (they did not have HIV) in another study were cured with the same regimen.

Reducing the length of hep C treatment could provide a series of important benefits to people looking to beat hep C. First, there’s the side effect factor. While its side effects are nothing compared with what people suffered when interferon was a hep C treatment mainstay, Harvoni in particular can cause reactions like fatigue, headache and weakness.

Second, there’s the confidence that physicians have in prescribing treatments to people they worry may not adhere well to a lengthy regimen.

A shorter treatment duration also reduces the risk that those who aren’t cured will develop resistance to hep C drugs.

And, of course, the matter of cost is huge. Twelve weeks of Harvoni retails for $94,500. The price is proportional to the treatment length, so eight weeks goes for $63,000. Such exorbitant costs, even when mitigated by discounts that insurers are able to secure, have led many public and private payers to institute restrictions on who can receive treatment, generally favoring those with more advanced liver disease. Finding ways to cut overall hep C treatment costs could open the door for more people to receive approval for coverage.

In fact, Dahari and his colleagues estimated that their mathematical model could reduce the overall cost of hep C treatment by 16 to 20 percent. For about half of those treated, the model could help cut costs by 50 percent.

One problem such cost savings are up against is the way Harvoni is packaged.

“Harvoni is only available in four-week bottles,” points out Jürgen Rockstroh, MD, head of infectious diseases at the University of Bonn in Germany, the head of the study of people with HIV acutely infected with HCV. “So prescribing six weeks will be difficult.”

Additionally, Terrault feels that without proper guidelines to recommend shorter treatment lengths, many clinicians will still prefer maximizing the chance of a cure over avoiding possibly unnecessary weeks of treatment. However, she hopes that real-world data of the success of shorter regimens will encourage more physicians to prescribe eight weeks of treatment to patients who meet the criteria. 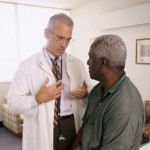