The odds of curing hep C are now better than ever. 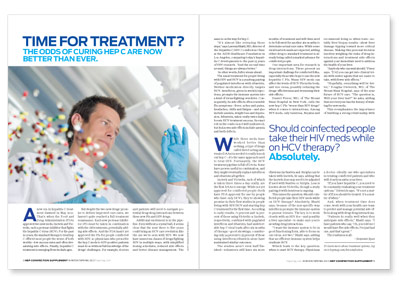 A new era in hepatitis C treatment dawned in May 2011. That’s when the Food and Drug Administration (FDA) approved two new meds, Incivek and Victrelis, each a protease inhibitor that fights the hepatitis C virus (HCV). For the past 20 years, the standard therapy to treat hep C offered most people the worst of both worlds—low success rates and often devastating side effects. Finally, hepatitis C treatment is emerging from its dark ages.

But despite the two new drugs’ promise to deliver improved cure rates, we haven’t quite reached a full treatment renaissance. Each new protease inhibitor (PI) must be taken in combination with the old treatments, potentially adding side effects. And the FDA hasn’t yet approved the PIs for people coinfected with HIV, so physicians who prescribe the hep C meds to HIV-positive patients must do so without full knowledge of the drugs’ challenges. For example, doctors and patients will need to navigate potential drug-drug interactions between these new PIs and HIV drugs.

Additional excitement is in the pipeline. Even without a crystal ball, it seems clear that the next three to five years could bring an HCV care revolution like the one we’ve seen with HIV. We now have numerous classes of drugs fighting HIV in multiple ways, with simplified dosing schedules, reduced side effects and better disease management. The same is on the way for hep C.

“It’s almost like retracing those steps,” says Laveeza Bhatti, MD, director of the Hepatitis C/HIV Co-infection Clinic at the AIDS Healthcare Foundation in Los Angeles, comparing today’s hepatitis C developments to the past 15 years of HIV research. “And the second time around, things are always better.”

In other words, fuller steam ahead.

The usual treatment for people living with HIV and HCV is a yearlong pairing of pegylated interferon with ribavirin. Neither medication directly targets HCV. Interferon, given in weekly injections, prompts the immune system into a kind of virus-fighting overdrive. Consequently, its side effects often resemble flu symptoms—fever, aches and pains, headaches, chills and fatigue—and also include anemia, weight loss and depression. Ribavirin, taken orally twice daily, boosts HCV treatment success. Its exact role in the combo is not well understood, but its known side effects include anemia and birth defects.

While these meds have worked better than nothing, a type of drugs called direct acting antivirals (DAAs) is needed to really knock out hep C—it’s the same approach used to treat HIV. Fortunately, the HCV treatment pipeline is full of DAAs. Some have proven useful in combination, and they might eventually replace interferon and ribavirin altogether.

Incivek and Victrelis, each of which is taken three times a day orally, are the first DAAs to emerge. While not yet approved for coinfected people (both have FDA approval for use by people who have only HCV), they’re showing promise in their first studies in people living with HIV/HCV and starting hep C treatment for the first time. According to early results, 71 percent and 74 percent of those using Victrelis or Incivek, respectively, combined with pegylated interferon and ribavirin, had undetectable hep C viral loads after six months of therapy—good showings, considering only 34 percent to 55 percent of those using interferon/ribavirin alone have maintained similar outcomes.

The studies aren’t even half finished—volunteers still have six more months of treatment and will then need to be followed for another six months to determine actual cure rates. While some viral load rebounds are expected, adding either drug to standard treatment is already being called a marked advance for coinfected people.

One important area for research is drug interactions. These present an important challenge for coinfected folks, especially those who hope to use the new hepatitis C PIs. Many HIV meds can affect the levels of HCV PIs in the body, and vice versa, possibly reducing the drugs’ effectiveness and worsening their side effects.

Daniel Fierer, MD, of The Mount Sinai Hospital in New York, calls the new hep C PIs “worse than HIV drugs” when it comes to interactions. Among HIV meds, only Isentress, Reyataz and efavirenz (in Sustiva and Atripla) can be taken with Incivek, he says, adding that the Incivek dose may need to be adjusted if used with Sustiva or Atripla. Less is known about Victrelis, though a study pairing it with Isentress is ongoing.

This raises the question: Should coinfected people take their HIV meds while on HCV therapy? Absolutely, Bhatti says, because of the non-specific way interferon prompts the immune system to pursue viruses. The key is to work closely with an HIV doc—and possibly a liver specialist—to make sure you’re avoiding drug interactions.

“I want the immune system to be in good functioning form, able to focus on one virus, not two,” Bhatti says, adding that an efficient immune system helps eradicate HCV.

Which leads to the key question: when to start HCV therapy. Physicians recommend doing so when tests—notably liver biopsy results—show liver damage tipping toward more critical disease. Making this personal decision involves weighing the risks of drug interactions and treatment side effects against your immediate need to address the health of your liver.

“Anybody who can wait should,” Fierer says. “[Or] you can get into clinical trials with newer agents that are easier to take, with fewer side effects.”

“Hopefully, everything will be better,” Douglas Dieterich, MD, of The Mount Sinai Hospital, says of the near future of HCV care. “The question is, Will your liver last?” he asks, adding that not everyone has the luxury of waiting for new meds.

This reemphasizes the importance of building a strong relationship with a doctor—ideally one who specializes in treating coinfected patients and who will closely monitor your liver.

“If you have hepatitis C, you need to be constantly evaluating your treatment options,” Dieterich says. “It’s not a matter of if you should be treated. It’s a matter of when.”

And, when treatment time does come, work with your health care team to predict and manage potential side effects along with drug-drug interactions.

“Patients do really well when they anticipate side effects,” Bhatti says. “I have patients who say, ‘Oh, you told me I would have five side effects; I’ve just had one, and that’s great.’”

The readiness is all.