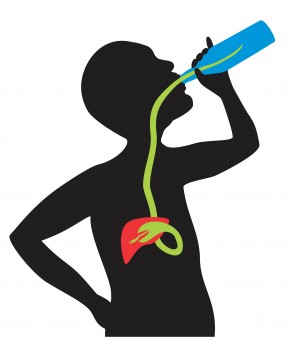 Yes, Energy Drinks Can Cause Hepatitis

Recently I was traveling and ran out of steam. I pulled into a gas station and left with my first ever energy drink. It had caffeine, sugar, and B vitamins, along with various herbal and other supposedly energizing supplements. It was the sort of concoction that I would normally shun, but my need for a boost outweighed my judgment.

I loved it. I had found a new friend. If I wasn’t trying to get to the airport, I would have stopped and bought another one. Good thing I didn’t. It turns out that energy drinks may be more dangerous than I had thought, especially if you drink too many.

In a case study reported in BMJ Case Reports (Rare Cause of Acute Hepatitis: A Common Energy Drink, Jennifer Harb, et al. November 1, 2016) , a 50 year old man drank 4 to 5 energy drinks a day for 3 weeks which caused severe liver distress. He was diagnosed with hepatitis, which simply means inflammation of the liver. In addition to viruses, hepatitis can be caused by many things, including drugs, alcohol, chemicals, and various microorganisms. Morgan Spurlock developed hepatitis from his fat-based fast food diet in the documentary Super Size Me.

Now we can add energy drinks to the list of things that can cause hepatitis. In this case, the Florida man had a belly ache, no energy, nausea, vomiting, and jaundice. Lab tests revealed high levels of vitamin B12 and folate. Doctors eliminated all other causes, and the man’s condition gradually improved after he stopped drinking energy drinks.

When I bought the energy drink that day, I clearly made a decision to choose something “natural” rather than a soft drink.  I know better. Snake venom and dog poo are natural but I wouldn’t eat them. Every year there are approximately 23,000 emergency room visits related to the taking of dietary supplements. Energy drinks are loaded with supplements that can accumulate to toxic levels. To date, there are at least 2 documented cases of energy drinks causing hepatitis.

An occasional energy drink is likely safe, but a cup of coffee would have been a better choice. There is a great deal of research showing the that caffeinated coffee is beneficial for the liver. So next time I am flagging, I’ll skip the energy drink. I don’t want to end up as a case study in a medical journal.