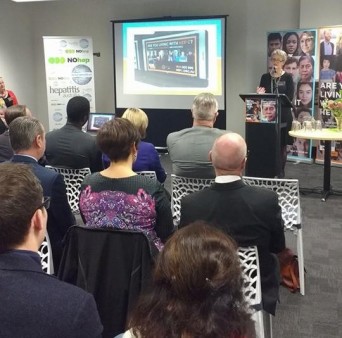 I was invited to speak at a gathering of notables on World Hepatitis Day this year. The occasion was the announcement that Epclusa had been placed on our Pharmaceutical Benefits Scheme (PBS), the system whereby Australians can access vital medication at highly subsidised rates, courtesy of our universal health care system.

I got to speak in front of a room of hepatitis gurus, including my specialist and the nurse who managed my treatment. Also present were representatives from Hepatitis Australia, Hepatitis NSW. And last but not least, the Federal Minister for Health (and Sport!).

I believe people like to hear from someone who has “lived experience of the virus” as it places HCV in a human context. We are not just numbers (42,000 Australians have been treated in the last 12 months). We are not just graphs (70% of cirrhotics have been treated). We are people whose treatment has made our families and friends relieved and happy. We are relieved and happy ourselves.

My challenge was to somehow tell my story in 5 minutes. Anyone that knows me knows I am an inveterate over-communicator, so the 5 minute timeframe was a challenge. I drafted, re-drafted, honed and polished a talk that no matter how I tweaked it, kept creeping over the 5 minute mark.

So I decided to talk fast.

I read on a fridge magnet once that you can be a good example or serve as a terrible warning.

I lived with hepatitis c for nearly 30 years. I had it longer than I’ve had every one of my cars, my marriage and all my pets.

For years hep c and I coexisted in an uneasy relationship. I pretended it wasn’t there, it destroyed my liver. Treatment was something I rarely thought about. I lived two hundred kilometres from from my nearest hospital and apart from that, liver specialists were light on the ground in western New South Wales so the logistics were daunting. But even more daunting were the stories I’d heard about treatment. I’d known a few people who had done treatment with interferon based therapies and they told of unrelenting fatigue, nausea, headaches ... and worse. So I pushed on raising a family, continuing my career, all the while carrying my secret illness.

As I started to feel the effects of my viral burden, I decided to try treatment. I was getting sicker, and something needed to happen. Interferon and ribavirin were my only options.
After just three weeks into a planned 48 week treatment program, the drugs had savaged my platelet count and destroyed my immune system. The one thing they had not done was cured me of hepatitis c. I couldn’t work  for months. They left me sick, frail and scared.
I had put off treatment until I could delay it no longer. Now It looked like I had hit the end of the road. I thought I would either die of, or with hepatitis C.
When my ex husband, the father of my two girls, died of cancer leaving me as my girls only living parent I decided, in the words of Dylan Thomas, not to go gentle into that good night, and started investigating breakthroughs in hepatitis treatment overseas using direct acting anti virals. All of a sudden my vocabulary became full of words like sofosbuvir, parateprivir, and ombitasvir.
I emailed, phoned and generally badgered health care professionals to gain access to these new wonder drugs. There were some trials, some compassionate access programs but they were all in capital cities. This time I decided not to let geography dictate my destiny and made contact with St Vincents. Within 5 months I was on treatment with direct acting antivirals.
Two weeks after starting treatment, my liver function tests were as close to normal as they had been in years. In four weeks they had hit the normal range. Just after four weeks on treatment I received word that the virus was gone.
These new drugs are truly game changing. They are easy to take. For the majority of people it’s one tablet, once a day for 12 weeks. They are well tolerated. Most people experience little to no side effects.
I am a school principal and I worked right through my treatment. I travelled. I started to be able to do things I had long since stopped because I was too exhausted. I don’t use the word miracle often, but that’s what it felt like.
Our health care system has provided the 200,000 Australians still living with hepatitis c with a remarkable possibility - a cure for their hep c. A cure that is easy to  access and easy to take. A cure that is worth it.
Everyone deserves their own miracle, all you have to do is reach out and take it.