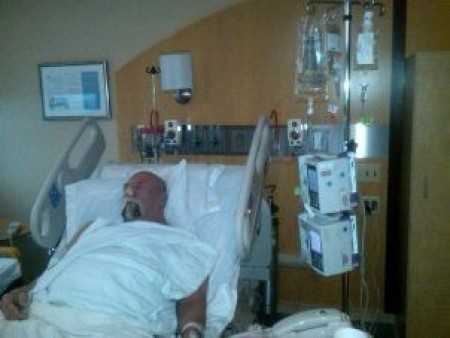 Hep C patient Wayne “Superstar Billy Graham” Coleman has been hospitalized for two weeks now in Wyoming due to continuing health problems related to the disease. He had a liver transplant more than 10 years ago due to HCV induced liver cirrhosis.

Billy Graham Back in the Hospital

There are a few clips of Terry “Hulk Hogan” Bollea and Billy Graham in Devon Nicholson’s week 27 update video. The two wrestling megastars have known each other since the 1970’s. Hogan idolized Graham and used many elements from Graham’s wrestling character and brought them to the next level in his own wrestling persona.

Graham helped Hogan break into the business when the local promoters in his hometown were holding him back. The two innovators in the sports entertainment field used to be close friends but hadn’t seen each other in person in years until recently. Some shots of their reunion (which Devon Nicholson was present for) are this week’s treatment update video.Growing up dreaming of becoming a pro wrestler, Hulk Hogan was always one on Nicholson’s idols. Devon liked that Hogan’s character presented good values and stood for what was right. Nicholson was shocked when Hogan made public comments that brought attention to his Hepatitis C situation when it first went public in March 2011.

When speaking about Devon’s Hepatitis C situation, Hogan questioned the WWE’s decision to place has Larry “Abdullah the Butcher” Shreve into their Hall of Fame despite Nicholson’s allegations. Hogan stated that Shreve had cut him without permission “through the chin” in a past match as well. Larry Shreve has “lied on the record” publically stating he did not have Hepatitis C to the media after providing blood test results indicating he has a history of the disease.

“Superstar” Billy Graham recently released a DVD that contains and extended interview of him conducted by Nicholson called “Face to Face - Raw and Uncut.” The DVD goes into detail with his decade’s long battle with Hepatitis C that has already cost him one liver and his continued health struggles due to the disease.

The DVD goes into Graham’s career as an artist and shows never before seen pictures from Graham’s personal collection. It also discusses his relationships with people like Arnold Schwarzenegger, Shelly Duval, Andy Warhol, Hulk Hogan, Jesse Ventura and many others celebrities he has been associated with over the years.

The DVD can be purchased here.