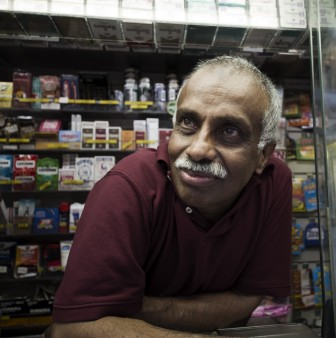 The Road Back to Bombay

On the six lane highway back to Bombay, a steady stream of cars and trucks all honking at each other as we descend from the plateau that holds Pune.

The terrain is rugged, rocky and mountainous. Sharp peaks of stone stab the horizon.

The slopes are covered in scrub and empty of human life, which stays in the flat, fertile valleys.

In my mind’s eye I can see the many armies that, over the centuries, have marched between these peaks on their way to conquer some walled city or mountain perched fortress.
Because the taxi driver and Jan needed to go to the toilet we have pulled off the highway into a shop filled layover.

I am sitting in the parking lot of a big Indian Road House typing on my laptop. Outside there is KFC and Macdonald’s side by side with Lonavla’s Best and Original Chikki and Ragwada Bites.

There is the continual honking of horns and every direction you look there are hundreds of people; women in colourful saris and men in trousers and collared shirts. Some have Big Mac’s and coke others on a Chikki and some chai.

Three days in Pune have come to an end.

Trips to the museum and following the wives as they shopped their way to paradise.

Amongst these tourist activities, as the ladies browsed the sari shelves and searched for silk shawls and indigo wraps, V and I discuss the global Hep C situation.

Fortunately all these little shops set aside a small space where tired husbands can sit while their wives shop, so V and I had some comfort there as we talked.

We discussed the situations in various countries and wondered why we rarely heard from countries like France or Denmark even though we know that Hep C is prevalent there and access to treatment is triaged so that people need to be F2 or worse to get treated.

Neither of us can understand why someone would wait for the disease to progress when treatment is so available and, relatively, cheap.

Today I received two emails related to this exact subject.

One from Italy where the Big Pharma funded Italian Hepatitis advocacy EPAC, a group that works hard to discourage people in Italy from using generics and the other from the USA where the guy’s doctor was worried that licensed generic medicines made in a FDA and WHO approved factory in India  might be toxic.

EPAC and Italians with Hepatitis C.

I wish you could find time to write about what the situation is still in Italy from the association EPAC who says it is by the side of patients with Hepatitis C.

It is not an urgent matter… maybe it is just another piece of the Italian story. But let me tell you what happened.

A woman I know purchased generic Harvoni and at the end of treatment was told by her doctor that she was HCV free,  she was cured.

She wanted to share her happiness of  her victory over HCV on the EPAC  FB site but the Admin intervened and explained to her how dangerous and illegal was the action of buying generic Harvoni.

This Admin, closely related to a senior EPAC officer, continued on about the illegality and crime of generic Hep C medicines importation.

But another woman, a member of the group, answered the admin’s position with a challenge.

Later I will try to translate the complete conversation. I think I should try to stay away from all this negative falsehood but I just can not help b ut react to these people with political and economic interests whose bias puts people’s lives at risk.

I wish I could do more about it.

And on a similar vein from the USA.

I received the package a while back. Thank you!

It feels like it would in any way that I tried to communicate to you how much this means to me.

My wife and three children will undoubtedly be happy that I have extended my life by several decades when I clear this illness.

However whilst my family is happy about things my gastroenterologist and his assistant seemed a little annoyed that I took matters into my own hands.

He said he had never heard of anyone getting medication this way and also commented that he “…hoped it was not toxic.”

Yes they gave me a pretty cool reception but they did agree to run the lab tests for me so that is something!

I started treatment six days ago and other than the first three days of “viral die off” the treatment has been pretty smooth sailing… what an amazing medicine.

Like you I want to shout it from the roof tops that this cure is possible. I started to reach out to others that are infected in our area so you may get a few emails in the near future.

Thanking you very sincerely and wishing you the best of health so you may continue helping others.

With EPAC you have an organisation that receives a large portion of its funding from Big Pharma actively discouraging people from seeking generic treatment even though there is now huge amounts of undeniable scientific evidence that generic Hep C meds are safe and just as effective as brand drugs.

This the US gastroenterologist you have a specialist Hepatitis doctor who does not even know that affordable generic treatment for Hep C is available and who, for some reason, thinks that it might be actually poisonous.