One Year Ago Today, A Reflection of Life 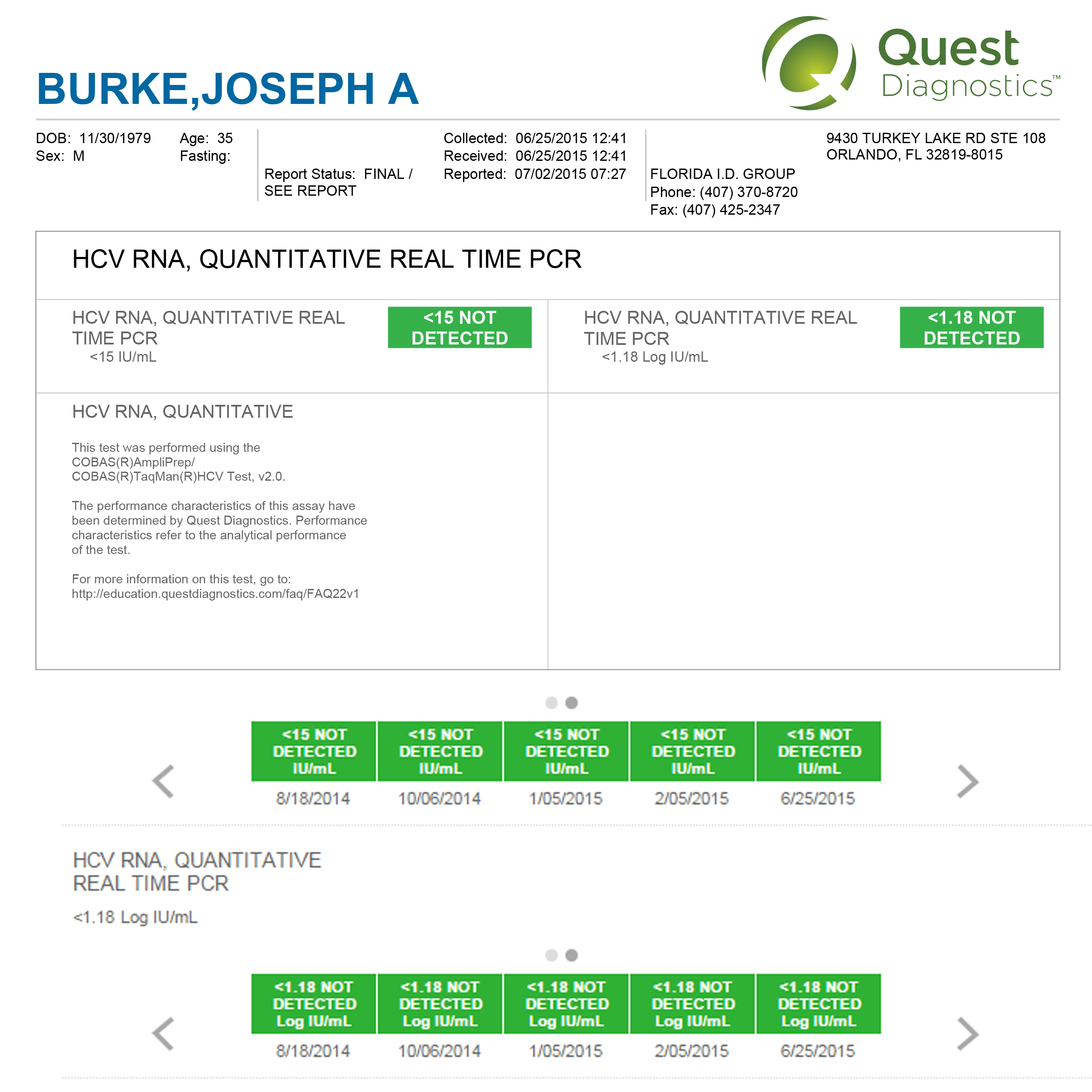 I officially obtained my one year “post liver treatment” lab results early this morning, marking my official one year anniversary of ending treatment on Sovaldi and Ribavirin. I ended treatment on July 7th, 2014. After one year of completing the toxic regimen, the virus remains “Undetected,” which means the my Hepatitis C is 100% medically, officially and without question gone for good.

It’s a little overwhelming to know that I don’t have to face one of my dreaded fears of liver transplant, ESLD (end stage liver disease) or cirrhosis. I always projected my life going downhill in my late 30’s based on how many years I actually had Hepatitis C and the estimated pattern of how the virus was attacking my liver, which was pretty regular. But now, God has gave me a new sense of normal, I’m cured. I don’t take this cure for granted, and I walk each day with a new fresh perspective, and certainly with a sense of humility for the extended years added.

I remember a deep conversation I had with my wife before we exchanged vows, and in that late night discussion, I told Alexandra some things she should be prepared for concerning my health, age and overall well being. I recall that night being tearful, sorrowful and painful. But true love conquers all barriers that life hurls at us. Thankfully, she stuck with me, and now, the cure has happened. All those dark disturbing things we talked about won’t happen the way I envisioned my life to progress. Even though it was my job to inform Alexandra the consequences, she loved me regardless, despite the difficulties and trying times, that’s the power of “real love.”

When I first met my wife in 2008, my mind was so fixated on the “what if’s” and the “could be’s” instead of what God can truly do with a little patience. That was the life lesson I was taught by the Big Man upstairs, patience and forbearance. I treated once in 2006 for 24 weeks on Ribavirin and Interferon injections, to ultimately relapse 3 weeks after treatment ended. I had very little expectation going into this new treatment on Sovaldi, but despite my fears, it worked! No more fixations and daydreaming about my life spiraling out of control as my liver fails. It’s pretty overwhelming, even as I write this, as the tears of rejoicing just flow.

I recall my wife telling me often, that she was praying for my cure. She frequently reminded me in church and home that her one main prayer was for the cure to happen. Above all else, she wanted her husband around, and the moment that prayer was answered, and God showed up, was mind blowing.

I’m fortunate, lucky and persevered through the trying times that us hemophiliacs faced in the 1980’s and 1990’s. It wasn’t easy being a bleeder with HIV and Hepatitis C in those days. The stereotypes imprinted from the negative press are still very relevant today, but it’s my job through this blog and “I Strive 2 Thrive” to educate the masses, and offer hope to those who suffer with my illnesses. It’s enough to have hemophilia alone, but combine HIV, chronic pain and my now my cure of Hepatitis C, I’ve become empowered to educate those who still have those uneducated beliefs about any of the illnesses I endure daily.

This win may be of science, and the pharmaceutical company Gilead for manufacturing Sovaldi, but the real win here is one for God. He allowed me endure just a little longer, become married, and through that I learned patience and a deeper understanding of who I am, and whose I am. I count my blessings daily, and don’t take each breath for granted. This cure has empowered me to help and enrich others lives, and do it with love that only comes from God. Today marks two anniversaries in my life, my parent’s 37th wedding anniversary and the one year anniversary of my cure. Funny how God does that right, almost like a wink and pat on the back as I’m reminded how truly awesome He is.