One Month, Lot of Doctors and More Diagnoses

Well, Thursday November 9 was my one-month anniversary knowing that I’ve got hepatitis C. I had really wanted to write up a blog posting, but I was just so beat from working and doctor’s appointments, so I put it off until after my post-workday nap, but I slept through until Friday morning. I vowed to blog over the weekend, but I spent that sleeping too, so now it’s Monday. Well, that’s pretty much the way my life is these days.

I started last week with an appointment with Les Seecoomar (my liver specialist), who had just gotten my liver biopsy results. Yup, it’s hep C and it’s a relatively recent infection (which is good news) and I have “stage one” fibrosis (the first level precursor toward cirrhosis and is also good news).

I also have no indication of iron accumulation, which made Les worry about why I have such high hematocrit, which is the percent of the blood composed of red blood cells. The “normal range” for men is something like 40% to 50% and mine was 58%, so he wanted me to see hematologist. We picked Randy Levine, from Lenox Hill Hospital who Vinny saw a number of times. Apparently there are a number of blood disorders that can interfere with alpha interferon treatments, so we have to get them ruled out first.

On Tuesday I had a phone consult with Paul Chambliss and have re-doubled again my high blood pressure medication Quinapril HCL to 80 mg per day.

I had my last two years worth of blood tests faxed over (about 25 pages) to Randy and headed up to her office the next day. On Wednesday, it was a torrential downpour and I just couldn’t face taking three subways to get to the Upper East Side, so I splurged for a taxi, but with the weather, it took 45 minutes and cost $20.

I had expected this to be a pretty quick “rubber stamp” sort of thing, just to be on the safe side. It turned out to be much more in-depth than I expected. And it turned out that Randy said I had polycythemia a condition where I have too many red blood cells per liter of blood circulating through my system.

This can be very serious as the blood becomes too thick (think of tomato ketchup vs. tomato soup) and when it’s too think, the blood can’t get into all those little arteries and can dramatically increase the likelihood of heart attack, stroke and other clotting problems. It also explains why I’m bright red rather than jaundice yellow and might even be why I’ve been having all those migraines and could even be the cause of my new-found high blood pressure and might contribute to my fatigue problems. 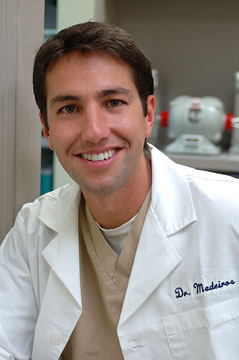 Polycythemia can be cause by either too much red blood cell production or too little blood volume. The next step is a nuclear medicine study where they radioactively tag some red blood cells and spend the day watching them. We’ll do that THIS Wednesday. The treatment in the short term is doing weekly blood letting or as they prefer to call it therapeutic phlebotomy. It won’t interfere with starting alpha interferon -- great news -- and the anemia side effect of the alpha interferon might actually decrease my need for those blood letting sessions.

Thursday’s doctor was David Mazza (my allergist), and we figured out that I was allergic to all the things I knew about plus mold. “There’s Fungus Among Us” I exclaimed! But this probably wasn’t the cause of the migraines.

Friday’s doctor was Michael Medeiros (my hottie dentist pictured on the right). This didn’t have anything to do with HIV, hep C or Polycythemia, but my dental insurance was going to stop when I went out on disability, and I wanted to make sure there weren’t any expensive problems lurking around.

Tomorrow I meet Olga Leonardi (my new Endocrinologist) who is going to do a DEXA scan to look at my body composition and try to get to the bottom of my very low testosterone (“normal” is 260-1000 ng/dL, I’m at 169 WITH daily androgel supplements), slightly high cholesterol,(“normal” is under 200 mg, mine is mine is 238) and very high triglycerides ,(“normal” is under 150 mg/dL, mine is 412).